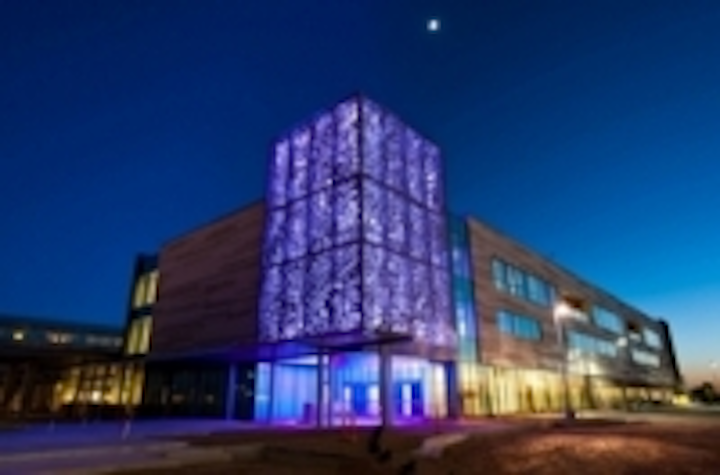 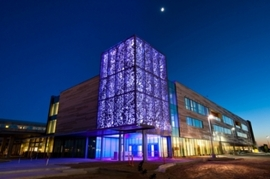 Next to US 60 – the main highway that travels through the Southeast Valley town of Gilbert, Arizona - the new Banner MD Anderson Cancer Center is a state-of-the-art facility built on the campus of the Banner Gateway Medical Center.

With over 300 staff caring for patients in 76 rooms dedicated to cancer care, the 133,000 square foot facility is designed to provide patients with customized and comprehensive treatment. The three-story cancer center is also built to house physician clinics, medical imaging, radiation oncology, infusion therapy and several other key patient care services.

Above the doors to the future main entrance of the facility is a four-story, 69 ft. tall, latticed tower. This metal structure is roughly 30 X 30 square feet in dimension, and designed to resemble the leaves and branches of the palo verde tree – known to be synonymous with nursing for its healing properties.

In the daytime patients and visitors can relax on balconies from the 2nd and 3rd floors looking into the tower where they are bathed in a natural light show created by the day’s sunlight dancing against panels of translucent white fabric that line the interior of the tower.

By night the client wanted to create an even more inspiring patient experience through the tower’s presence by lighting the structure in a way that represents an eternal flame – a universal and well-loved symbol of endurance and hope.


The Challenge: Transforming a tower into a beacon of light at night

The goal set for the lighting designer was to transform the metal-based feature into an inspiring beacon of light that would represent healing and hope for the center’s patients and staff after the sun goes down.

The cancer center building project itself was already conceptualized before the client decided to illuminate the symbolic, tower structure but as the design progressed, it became apparent that the structure resembled a lantern ... and the ‘Lantern of Hope’ concept was born.

With the end goals clearly in mind, the lighting project presented a number of design challenges created by the unique structure in place and the physical environment it resided in.

The heat and dryness of the desert was a key factor ... requiring that any fixtures used be robust enough to withstand substantial shifts in temperature and provide protection from intrusive sand particles.

Next, the unique nature of the structure made mounting the fixtures a design and technological obstacle. The luminaires had to be in just the right locations and at the correct angles to accomplish the desired result of creating consistent color effect across each cloth panel while remaining hidden within the latticed structure.

Consideration also had to be given to getting people up the four stories of the tower for maintenance so it was crucial to have a low maintenance solution and fixtures that could be easily attended to when necessary.

Finally Arizona’s dark night sky was a consideration, with the lighting design requiring a solution to perform within acceptable brightness and contrast limitations to avoid skyglow effects.

The Lumenpulse Solution: Lighting the “Lantern of Hope” with cutting edge LED technology

LED technology was ultimately chosen because of low maintenance requirements, longevity, and the ability to utilize color changing effects but it took some education from the design firm:

“We had to convince the client that LED technology could accomplish the task,” said Sara Schonour, lighting designer at Cannon Design. “We did several rounds of calculations that compared 3 different manufacturer’s fixtures to prove that we could get the color they wanted, that we could control it, and that the light would reach to the top of the structure. We also made a small scale mock-up to demonstrate color changing effects, color saturation control, and source intensity.”

Using custom mounting brackets developed in concert with Lumenpulse, luminaires were placed at the bottom of the Lantern’s panels to graze the interior fabric. For the full height panels, two rows of luminaires were installed at the bottom of the lantern, and a single row of fixtures dimmed to a lower intensity were placed at the base of the shorter, upper panels. This ensured that all four sides of the Lantern had the same visual appearance and a uniform glow from bottom to top of each panel.

Narrow beam optics with light diffusing film were used, and half of the fixtures were precisely focused to direct light onto the vertical fabric planes, and not straight up, as part of the solution to reduce sky-glow.

A glass roof was also added to the structure, and although the driving force for this element was rain and bird related, it enabled the lighting designers to utilize the ceiling to redirect some of the up-light back down into the lantern’s body to further respect the dark night sky, and achieve a more uniform illumination across the surfaces of the lantern.


“The Lumenpulse products out-performed its competitors in every aspect with the total package of performance, reach, cost, accessibility, adjustability, maintenance, and fixture look and design winning it for Lumenpulse,” said Schonour. “The ease of control through the Lumentouch system, giving the staff the ability to adjust the lighting to suit their facility’s needs, was another key element.”

With this innovative Lumenpulse solution the goal has been achieved where natural light comes through the aluminum panels in daytime to provide a dappling effect and at night the lantern can be seen clearly from the passing highway and from miles around, as the structure glows with the light of hope.

Using the Lumenpulse Lumentouch control panel, the cancer center is also able to choose between pre-set, smoothly fading, pastel color changing sequences and holiday themed shows, but it is expected that most of the time the “Lantern of Hope” will glow lavender - the universal color for cancer.

The “Lantern of Hope” was switched on for the first time in June 2011 as the climax to a symbolic candle lighting ceremony and ahead of the official opening of the center in September.

This is the first phase of a three phase construction project and when finished the entrance below the lantern will become the main entrance for the entire facility and will include a water fountain, benches and a garden - a soothing transition from the harsh desert to this calming gateway into healing.

"It makes it a tranquil environment," said Matt Forman, project manager for Cannon Design. "I think it's a fantastic element."