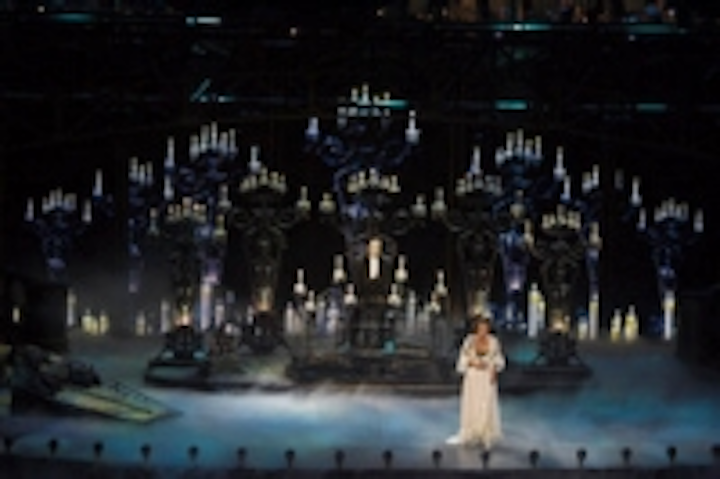 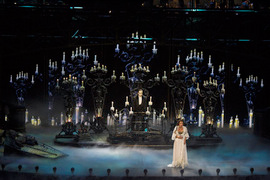 The high-impact digital scenery and projections elements were designed by Jon Driscoll. He was asked onboard by the anniversary show's designer Matt Kinley and by Cameron Macintosh's production manager Nic Harris. Driscoll also designed the projections for Phantom sequel "Love Never Dies" which ran at the Adelphi Theatre.
Driscoll in turn asked XL to provide the hardware, with XL's Paul Wood project managing their elements of the three RAH shows, the final one of which was broadcast live to movie houses in the US, Japan, Australia, Europe and across the UK. Driscoll has worked with XL in the past and says, "As soon as I was confirmed for the job I requested that XL came in to supply the equipment and expertise to deliver the show's video. I have worked with Paul before at the Albert Hall. He knows the venue and its specifics very well and I thought he was the man for the job".

The overall creative brief was to keep the show's look and feel faithful to the late Maria Björnson's original Phantom design which is hugely loved and respected worldwide.

However, the use of digital scenery elements was vital in adapting the show to work smoothly and slickly in the 5,500 capacity RAH, as were certain classic set pieces like the moving bridge and the opera house Proscenium arch.

The video was split into two sections. Upstage, above the raised central orchestra platform was a 20 metre by 10 metre grey sharks-tooth gauze, projecting onto this were 10 overlaid Barco FLM HD20 20K projectors located in the Grand Tier boxes.

Below, upstage on stage floor level, were nine 4.5m high x 2-3m wide tracking set panels filled with a total of 75 square metres of XL’s Pixled F11 LED screen. The five inner panels moved into a series of different entrance and exit positions for cast and scenery trucks to move on and off stage.

All video content was played in via two Catalyst media servers, one feeding projection and one for LED screens. All the images were controlled and output via a Barco Encore screen management system.
XL supplied 5 HD cameras for show content. Three were operated, and were directed by Ruary MacPhie, These were used for IMAG projection onto the projection surface both during the main show and a gala section after the end of the final show. THIS featured a reprise of classic production numbers like "Phantom of the Opera" and "Music of the Night", speeches and appearances by past cast members including the original leads, Sarah Brightman and Michael Crawford.

Onstage, one of the two HD mini cams was positioned behind and shooting through the middle of the centre LED screen panel for a reverse shot of the stage and auditorium for specific show designed shots, and another was mounted on the set just below the conductor position for another reverse shot effect of the RAH.

Most of the content was derived from Björnson’s original designs, which were treated to appear digitally and work in the different setting, whilst retaining all their original ambience. Some new content was created by Driscoll in the appropriate pastiche.
Matching the two different types of video once on site at the RAH was a great tribute to XL Video's engineers in balancing and tweaking the LED to get a near seamless blend, whilst also accommodating the requirements and requests of the television broadcast crew and lighting designers, Andrew Bridge and Patrick Woodroffe, resulting in some close collaboration.

The two video screen elements were united by the swooshing curtains which swept in with great elegance and presence across both surfaces.
Driscoll took a film crew into Phantom's London home at Her Majesty's Theatre in the Haymarket, and working closely with their fly crew, painstakingly shot the curtain coming in against a green screen, being careful to capture all the detail and character of the material, its folds and motion. These were separated in a model theatre, re-animated and amplified to fit the RAH screens, providing dramatic and highly realistic punctuation points for the end of each act.

Paul Wood comments “The timescale was the major challenge in building such an ambitious and high profile one-off show to such exacting standards of excellence, and one to which all departments responded, delivering a truly world class experience fitting the landmark occasion”.

Phantom of The Opera first opened in London's West End at the 1,200-seat Her Majesty's Theatre on October 9th 1986, with Michael Crawford and Sarah Brightman as the principals. It is still there, more than 10,000 performances later! It opened on Broadway on January 26th 1988 and has clocked up over 9,800 performances, gaining the accolade of longest-running show ever. Dozens of productions worldwide include currents in Budapest, Hungary, Las Vegas, USA and Kyoto, Japan, with one planned next year in South Africa.