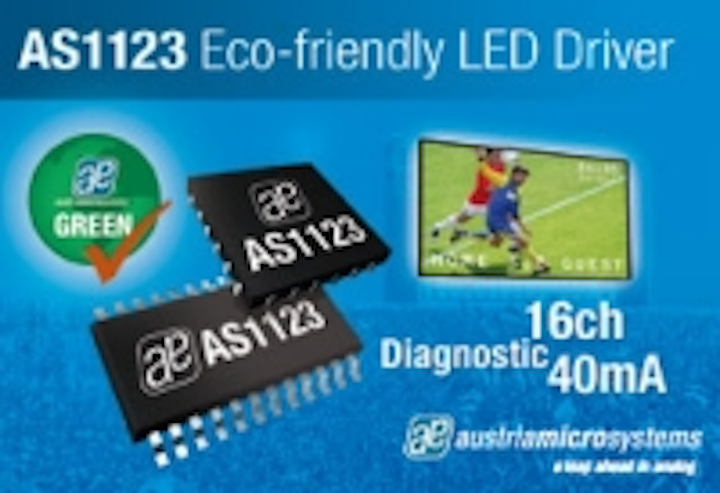 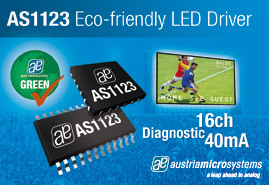 Unterpremstaetten, Austria (October 18, 2011) – austriamicrosystems (SIX: AMS), a leading global designer and manufacturer of high-performance analog ICs, has announced the AS1123 constant-current, 16-channel LED driver with an on-chip diagnostic read-back function. The AS1123 is designed for use in industrial applications, indoor/outdoor public information displays, LED panels, and large LED video walls.

Designed with a maximum LED supply voltage of 5.5 V, the new power-efficient AS1123 direct LED driver is optimized for LED panels where only a single LED is connected per output. The optimization of the LED driver to those low supply voltages allows for up to 50 % lower VDS versus existing higher voltage output drivers. This reduction of VDS gives better efficiency resulting in lower power dissipation. The AS1123 LED driver also features integrated diagnostics for over-temperature, open-LED and shorted-LED conditions. Internal registers store global fault status information as well as the detailed temperature / open-LED, shorted-LED conditions for future analysis.

The 16-channel LED driver AS1123 also features a low-current diagnostic mode to eliminate display flicker during global fault testing. In this mode, a small test current is applied to the display for a very short time. As a result, LED testing is not visible and can therefore be applied during normal operation. These features make the AS1123 well suited for fixed- or slow-rolling displays. Other applications include large LED matrix displays, displays in elevators, public transportation, and even large displays in stadiums and public areas.

The output current of the AS1123 is adjustable up to 40 mA per channel using an external resistor, and features excellent output current accuracy of +/- 3 % between LEDs and between ICs. This ensures high picture quality and uniform brightness for an LED display since intensity variations between LEDs and LED modules virtually disappears.

“Large video walls such as those designed to the HDTV standard have an increased number of LEDs”, stated Rene Wutte, austriamicrosystems’ Marketing Manager for Lighting. “Since a full HD display uses 6 million LEDs, it’s important that the LED driver is optimized for power since saving a few milliwatts per LED times 6 million yields power savings in kilowatts. This not only results in cost savings during operation of the LED display, but also allows green and eco-friendly design as every saved kWh saves more than half a kilogram of CO², a key selling feature that’s becoming more and more important.”

Price and Availability
The 16-channel AS1123 LED driver is available now and is priced at $0.75 in 1000-piece quantities for the TQFN-24 package. A demo board is also available to reduce development time. For more information on austriamicrosystems’ AS1123, please visit www.austriamicrosystems.com/LED-Driver/AS1123