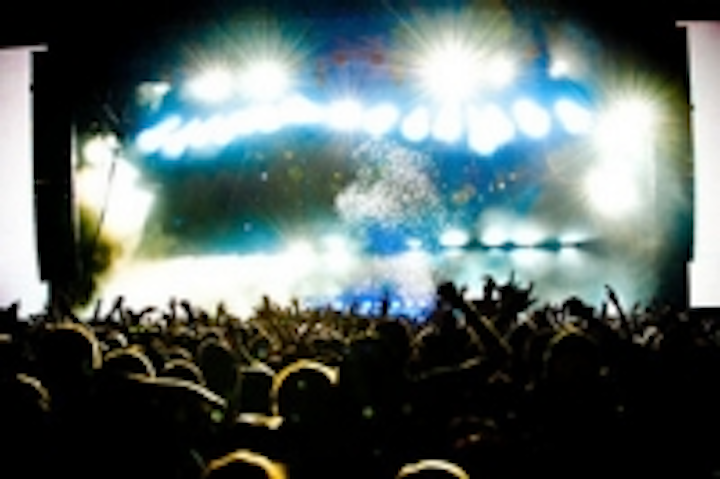 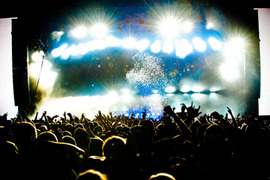 The statistics include over 700 moving lights - a mix of Clay Paky, GLP, Martin Professional, Robe and Vari*lite; three systems of the new BT12 scenic LED screen - two at SW4 and one as part of a specials package for U.N.K.L.E. - totalling about 100 square metres; over 300 LED lighting fixtures - including i-Pix Satellites, BB4s and BB7s, Chroma-Q ColorForce 72s and PixelLine 1044s; about 200 Atomic strobes, and ... well.. they lost count of the amount of blinders that were out, but it was "serious" numbers!

The hectic long weekend saw a variety of lighting console provided to suit all tastes and operating styles - lots of Avolites and Chamsys, a healthy contingent of Whole Hogs and a grandMA.

About 50 crew were deployed around the various sites to ensure that the Colour Sound reputation for excellence, attention to detail and good vibes was every bit as everyone expected.

CSE has been involved in lighting the Leeds site since it started up in 1999, and this year provided equipment for all stages except the main and second - so that incorporated Lock Up, Silent Disco, Piccadilly Parties and BBC Introducing, plus portable lighting rigs for five campsite DJ performance areas.

Tony Wilson was the crew chief in Leeds, while Andy Melleney looked after all the company's Reading activities, which took care of all lightning requirements for Lock Up, two silent disco arenas, BBC Introducing and two other corporate hospitality areas.

The UK's favourite dance festival took place in Daresbury, Cheshire, and CSE was very proud to be asked to supply lighting for both the open air stages which were set up opposite each other about three fields apart. They were headlined by an inspired and truly star-studded line up of The Chemical Brothers, Tiesto, Armin Van Buren and David Guetta.

Colour Sound's roots lie close to the energy, creativity and ethos of the dance and electronic music scene, so it meant a lot to be part of this landmark and original dance event.

CSE was asked onboard by Ian Greenway of LarMac Live who co-ordinated all the technical production management for event managers Loudsound Events. They have worked together on many other shows, but this was the first time CSE has lit Creamfields since the original two festivals in 1998 and 1999. Say's CSE's Haydn Cruickshank, "It is always good to work with the LarMac LIVE team, who really appreciate good quality production values and the amount of effort, planning and detail that goes in to making events like this run smoothly".

The two CSE crew chiefs were Stuart Picton and Phil Lee, and the kit supplied to the two stages was identical. Between them, it included Martin Professional MAC 2Ks, VARI*LITE V*L3000s, V*L 2500 Washes and Clay Paky Alpha Beam 300 moving lights, over 100 GLP Impressions, backed up with lots of Atomic strobes and Molefeys.

The lighting elements all went very smoothly, but the inclement weather - which was shared between most of the events that weekend - provided a few challenges and made everything tougher going as the mud factor increased!

SW4, Clapham
CSE supplied the whole site, consisting of four stages, with lighting for organisers Lock 'n' Load. Earlier in the year, they had worked on their "Get Loaded In The Park" event - also on Clapham Common, which was also a great success.

CSE also supplied 'specials' packages for Underworld (LD'd by CSE's own Haydn Cruickshank), Richie Hawtin and Andy C, all playing different stages throughout the SW4 weekend, and for Too Many DJ's (LD Simon Barrington) who played Reading/Leeds as well as the aforementioned U.N.K.L.E (LD Sam McLaren).

The warehouse was completely emptied for the several days by the time CSE had also installed a new contract hire lighting rig into Electric in Brixton, south London, for the start of their autumn season as well as extra LED fixtures to The Box in Soho, which is another contract service venue.

The main challenge, says Haydn Cruickshank, was the "Sheer scale, logistics and planning of detail needed to get that volume of equipment to multiple locations, much of which was coming straight off the previous weekend's round of festivals".

2011 has been the busiest festival season ever for Colour Sound Experiment, starting with the Sci Fi Weekender in Wallasey, Liverpool and ending with Bestival on the Isle of Wight next weekend, with some 50 in between!