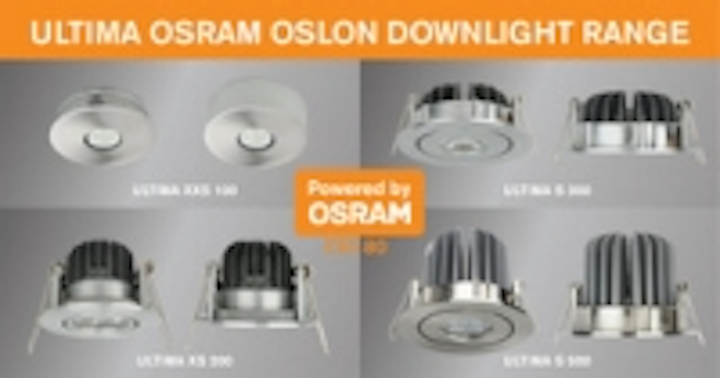 OSRAM OSLON LED is used across the full Ultima range and combined with a high quality optic delivers optimum light output and consistent performance. The heat sink has been specifically designed with minimal depth thus utilizing less ceiling height without compromising on the impressive lifetime of 30,000 hours.

Since its launch the Ultima S 500 which guarantees equivalent light output as GU10 50W halogen has undergone some extra enhancements and is now available in two color temperatures 3000K and 4000K in addition to two beam angles 35° and 60°. Supplied with a fully dimmable 700mA terminal block driver, suitable with most phase cut leading edge and trailing edge dimmers, the Ultima S 500 delivers on both quality and performance.

Ultima S 300 integrated LED MR16 sized downlight has equivalent light output as GU10 35W halogen and impressively only requires 6cm under ceiling height. With a CRI of 80 and in varying kits with fasteners for quicker installation makes this a distinctive downlight amongst the competition.

If your seeking a narrow beam angle for accent lighting then the Ultima XS 200 is the ideal solution at 20°. This ultra compact integrated downlight is the same diameter as MR11 and supplied in two color temperatures 3000K and 4000K.

At 11mm in height the Ultima XXS 100 IP44 is suitable for bathroom installation in the recessed version or also ideal in cabinet installation in which a surface mounted version is also available. This 1.8W Power LED compares exactly to a JCG4 20W in light output.

With its competitive pricing and lifetime of 30,000hrs the Ultima integrated LED downlight range is already being well received in both retail and trade.