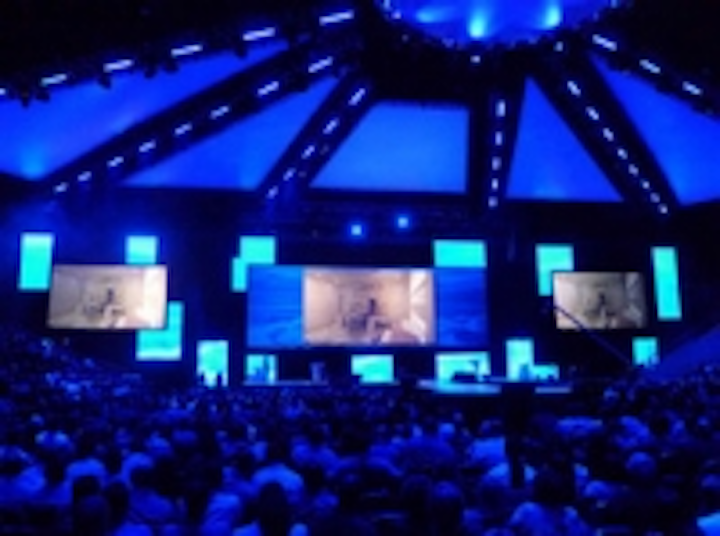 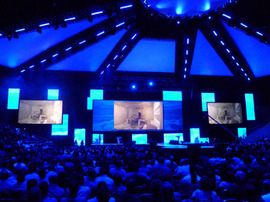 Lighting and set designer Olivier Ilisca of Chicago-based lighting design and show management practice CenterStage Productions (CSP), used 82 Chroma-QTM Color ForceTM 48 LED battens on his lighting rig for the 2011 Walgreen's Managers Meeting event, staged at the MGM Grand Arena in Las Vegas.
CSP is a highly successful company that was founded in 1996 by Olivier and Bruce Holland. They now employ 15 full time staff and work on over 300 diverse shows worldwide each year.

The biennial Walgreens event was produced by The Show Department, and all lighting requirements were supplied by the Las Vegas division of leading lighting rental company, 4Wall. Having taken a break in 2009, it was the first Walgreen's Managers Meeting to be staged in four years, so the client requested some extraordinary visual ‘wow factors’.

Olivier's spectacular set design featured circular central trussing architecture with ten trussing spokes coming off it above the stage and audience. The Color Force fixtures were butted up together and used in strip effect, running up/down these spokes and pointing straight downwards.

They were pixel-mapped in a Maxedia video server, and fed with video content which was triggered by one of the show's lighting consoles. It was the first time that Olivier has used Chroma-Q products and he enthuses, "The Color Forces looked really cool, worked perfectly and I really enjoyed using them."

He needed a very bright, linear LED fixture that would make eye-catching effects and highlight the shape and form of the rig - Color Force was the practical choice in this instance. Part of an enormous lighting rig, the fixtures were used for producing a wide variety of movement effects, with content varying from intricate kaleidoscopic patterns to slower undulating abstract ambient motion effects and dramatic block colours.

He was especially impressed with the reactiveness of the Color Force LEDs,- which needed to be extremely quick to optimise the video driven effects. He adds, "The colours are also beautiful and have a great range and variation."

Brightness was a primary factor. With the fixtures pointing directly down at the stage floor and audience, they had to throw at least 66 feet / 20 metres, and it was also important to see the sources while the effects were running, to appreciate the full impact. "I will definitely be using them again" he concludes.

4Wall has a large stock of Chroma-Q Color Force battens – including the 12”, 48” and 72” lengths, all of which were purchased through Chroma-Q's exclusive US distributor, A.C Lighting Inc.

Their Color Force fixtures are used frequently on large corporate events and presentations, as well as at trade show booths and for concerts and parties.

The next event coming up for the Chroma-Q's will be Blizzcon 2011 in Los Angeles.