Robe Is the right word for Reazione A Catena 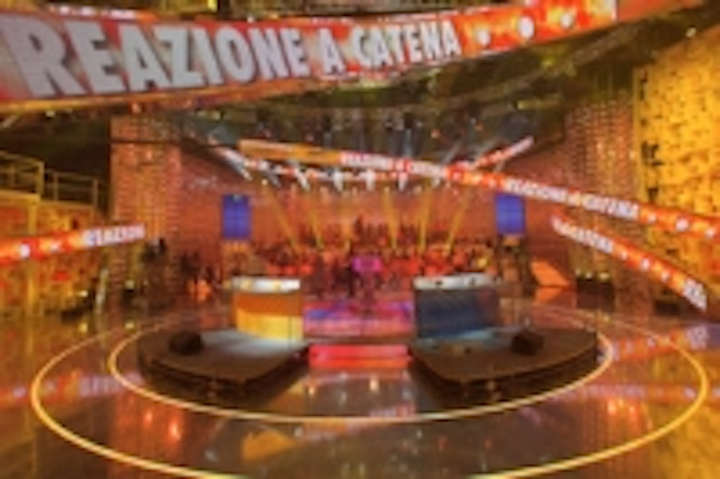 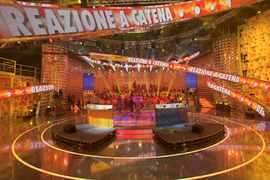 Over 90 Robe moving lights including the new Robin 600 LEDWash are the core lighting fixtures being used on the new series of "Reazione A Catena" (Chain Reaction), a popular Italian games show based on contestants finding hidden words, which is being recorded at C Cinecittà Studios in Rome for RAI TV.

Lighting is designed by Massimo Castrichella, one of Italy's leading TV lighting designers, who has an impressive 33 year track record with the country's top TV channel, also making him one of the most knowledgeable and experienced practitioners in the art of TV lighting.

The set is based around a completely spherical auditorium with a small stage and curved seating. The studio walls are white and therefore ideal for coloration and gobo projections from the lighting, and a series of curved ribbon like LED surfaces are threaded around the space. The lighting is rigged on three circular overhead trusses measuring 5, 10 and 15 meters respectively, and on about 90 meters of linear truss also in the roof, which makes a versatile hanging framework.

Everything in Studio 15 is rounded to help build the dramatic moments and also bring on a lively entertaining ambiance, based on a concept originated by scenographer Marco Calzavara.

Castrichella has mimicked the shapes and curves with his trussing design and specified his favorite moving light brand - Robe.

The rig includes 40 LEDWash 600s - a first time use for Castrichella - along with 18 x Robin 600 beams which are positioned on the floor onstage behind the contestants, and utilized for very intense beam looks and fabulous wide angle camera candy.

For general and task lighting, 36 Robe ColorSpot 700E ATs are hung at the back and around the sides of the studio. They are also using 4 Robe Haze 400 FT machines for atmospheric enhancement. In addition to that, he has some other moving lights and large areas of GLUX 10 and 6 mm pitch LED screens at his disposal.

Castrichella has been using Robe products for about 7 years now, so it comes as no surprise that he likes them enough to state it is his moving light brand "of choice". Furthermore, he thinks the ROBIN 600 Beam is "the best beam luminaire" on the market at the moment.

He is equally as enthusiastic about the LEDWash 600. "There is absolutely nothing like it," he says, praising the intensity, quality of light, incredible color range and smooth color mixing as well as the zoom.

On last year's series, he used ColorWash 1200E ATs, which this year have been replaced by the LEDWashes "They draw about half the power, but give me almost the same light output," he says.

The LEDWashes are stationed on the rear trusses and point forward towards the stage, washing the back and side walls. He's also making the most of their great range of true whites to replace some of the conventional studio white lights.

It's the 6th series of Reazione A Catena that he has lit, and comments that it's been easy to keep the lighting aesthetics looking different and interesting each time using Robes.

On the 2011 series, he's working with two lighting operators Quintino Caci (moving lights) and Maurizio Ranaldi (catalyst media servers playing out content to all the LED surfaces), who are both running Compulite Vector Blue consoles.

PR's Roberto Presutti has over 80 LEDWash 600 at the moment which are constantly out working, and will soon be adding more. "Already they are a hugely popular rental item and an ideal one - we don't want them sitting in the warehouse!" he declares, adding that there is a huge interest from TV LDs, especially those working in the light entertainment sector.

Reazione A Catena will be recorded over a 3 month period at the Cinecittà complex, founded in 1937 by Benito Mussolini and his head of cinema Luigi Freddi for propaganda purposes. In the 1950s, Cinecittà was the filming location for several large US film productions like Ben-Hur, and then became the studio most closely associated with legendary Italian director, Frederico Fellini.