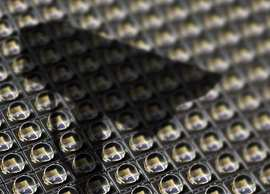 The infrared OSLON typically provides 1070 mW optical power at 1 A operating current, and it features a typical thermal resistance of only 6.5 K/W. A lens with +-45° emission angle is integrated in the device. Due to this adapted outcoupling lens the IR OSLON delivers 15 percent more output power than components without lens. With a wavelength of 850 nm, the IR OSLON is particularly well matched with
the sensitivity of CMOS and CCD camera sensors. The small package allows compact arrangements which enable a very high power density. Especially 3D cameras benefit from the improved power since the IR-LED can be modulated up to very high operating currents of 5 A in the range of 10 MHz.

To achieve the record-breaking ratio of device size to power, OSRAM Opto Semiconductors combines its nanostack chip technology with the temperature stable OSLON Black Series package. The highly efficient stack chips have two p-n junctions connected in series and generate nearly twice the optical power of conventional emitters. The OSLON Black Series package is based on a metal lead frame, and its thermal expansion matches exactly the thermal behavior of circuit boards. Thus a good cycle stability is achieved, even at heavily fluctuating temperatures as they may, for instance, occur outdoors. In other respects, too, the IR OSLON complies with the highest quality standards, as for example with the automotive standard AEC-Q101. Together, the latest chip technology and the excellent package properties ensure an operating lifetime of up to 50,000 hours.

Extensive Product Portfolio for Illumination
The IR OSLON is fully compatible with its counterpart for the visible spectral range. Manufacturers of street lighting or CCTV systems who combine visible and infrared LEDs can use their experience with OSLON Black Series LEDs and apply existing designs and board layouts.

With the IR OSLON, OSRAM Opto Semiconductors expands its position in the field of infrared illumination and complements its range of products with an additional power class. The new device particularly addresses the security industry. Possible applications range from spotlights for IR cameras and CCTV systems via machine vision solutions to number plate recognition. For Dr. Joerg Heerlein, Marketing Manager for infrared devices with OSRAM Opto Semiconductors, the IR OSLON hallmarks the beginning of a new product family: “As our next move we plan a 940 nm version. The longer wavelength reduces the so-called red glow effect: since humans perceive intensive infrared light as a faint red glow, this IR OSLON is especially tailored for light sources which should not be seen by
people.”