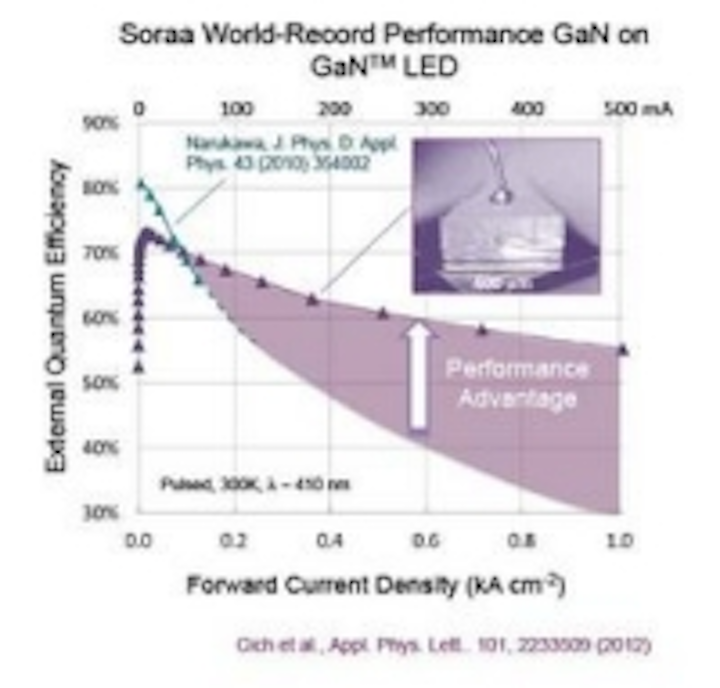 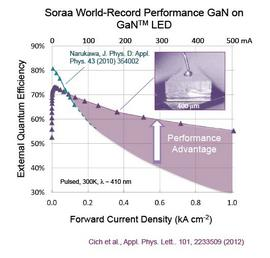 “The record breaking performance from our next generation of GaN on GaN LEDs is a credit to the extremely talented research and development team at Soraa, and a testament to the vision of our founder and GaN on GaN pioneer, Dr. Shuji Nakamura,” said Mike Krames, CTO of Soraa. “But what’s amazing is that we have just scratched the surface in terms of performance gains from our GaN on GaN LED technology.”

Soraa’s GaN on GaN LEDs handle significantly more current and emit ten times more light per unit area of LED wafer material than conventional LEDs made by depositing GaN layers on cheaper foreign substrates like sapphire, silicon carbide or silicon. The company’s GaN on GaN technology leverages the advantages of the native substrate, including over a thousand times lower crystal defect densities that allow reliable operation at very high current densities (the same principle that enabled Blu-ray laser diodes). In addition to superior crystal quality, the native substrate’s optical transparency and high electrical and thermal conductivity enable a very robust, simple LED design that delivers maximum performance. Another advantage of the GaN on GaN approach is that it enables considerable flexibility in the choice of crystal growth plane.

“We firmly believe that GaN on GaN is the future for LEDs and we’ve developed a comprehensive intellectual property program and patent portfolio covering the technology to maintain our leadership position.” added Krames.

Soraa leveraged the advantages of its first generation GaN on GaN LEDs by introducing in 2012 the world’s first true full-visible-spectrum LED MR16 lamps—a superior alternative to 50-Watt halogen MR16 lamps. Soraa’s LED MR16 lamps have a CRI of 95 and R9 of 95 (higher than most halogen lamps) and compared to halogen lamps, produce no UV or IR; last up to 10 times as long; use 75 percent less energy; run cooler; produce a much more consistent and efficient beam; and are compatible with existing lamp fixtures and lighting infrastructure.

For more information on Soraa’s GaN on GaN LEDs and lamps, visit www.soraa.com.