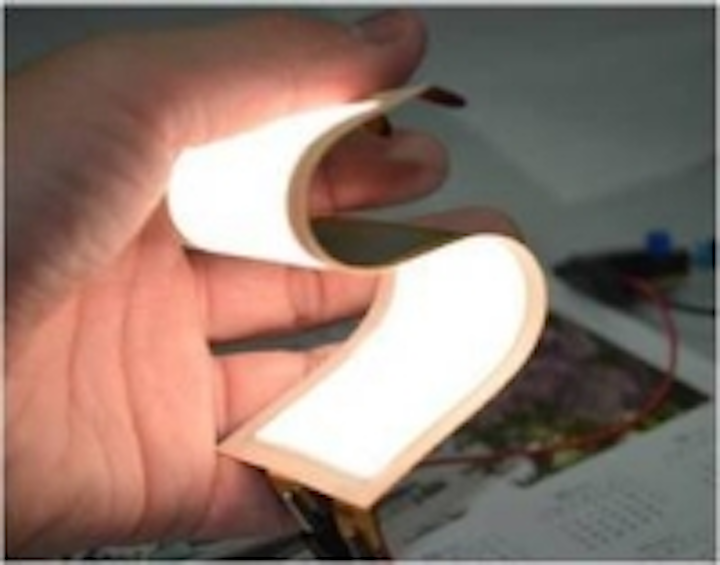 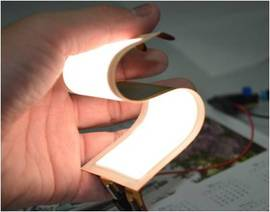 LG Chem’s OLED Light Division has announced that it has finalized development of its new plastic film type flexible OLED panels. The panels are produced through new processes and technologies using plastic films which enable the panels to be lighter and truly flexible.

The truly flexible characteristics will enable unprecedented luminaire designs and even wall paper lighting, as well as new lighting applications for automotive and airplane industry.

From a technological perspective, transparent polyimide substrate enables the panel to emit light towards bottom side; a new substrate coating technology has been applied to reduce costs; and additional barrier technologies have been applied to prevent material degradation against the permeation of water vapor and oxygen.

LG Chem is aiming for the first half of 2015 to commence mass production of this new film type flexible OLED panel, which is expected to open significant opportunities for expanding the market.

About LG Chem OLED Light Division
LG Chem’s OLED Light business was officially launched in 2011, following the company’s 15 year research endeavor on OLED materials. As LG Chem was already a leading components supplier for the LCD industry, the company combined its operational excellence with its material expertise to be the first OLED panel manufacturer to mass produce panels at efficacies of 60lm/W. LG Chem’s OLED Light business also possesses an optimal cost structure with LG Chem producing its own materials as well as most of the key components for OLED panel production. Finally, with Korea being the leading country in OLED displays, LG Chem is surrounded by the best OLED infrastructure in the world. The company has recently announced that it will be mass producing its 80 lm/W OLED panels as well as bendable panels within the third quarter of this year.