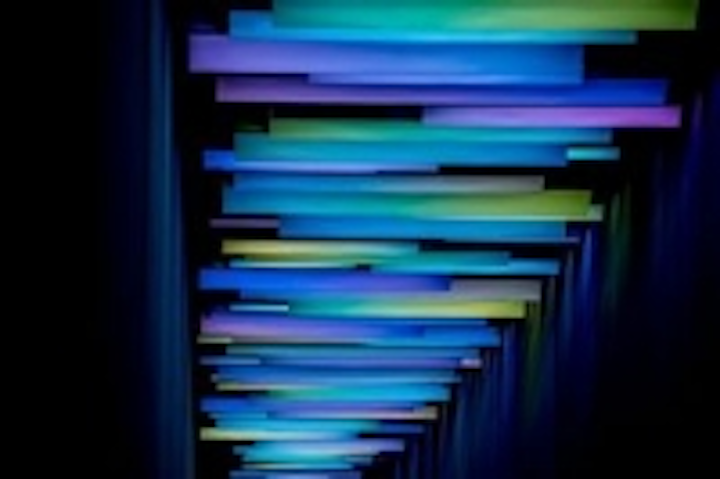 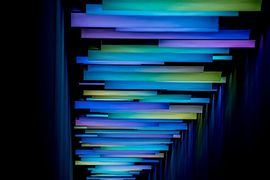 Lighting and visual artist Nick Gray from London creative design practice Renegade created a stunning 90 metre long video / light sculpture in the entranceway to the 2013 100% Design exhibition at London’s Earls Court Exhibition Centre.
All 27,000 plus visitors entering the three day event had to walk through this installation which took them to the very heart of the exhibition floor.

Gray was asked back by Studio Design, the exhibitions’ designers after his innovative work for last year’s show. He was commissioned to create something visually arresting that would ensure a complete WOW factor experience for all entering the Hall.

He based his design - which used 121 lengths of LED Video Flex, a 1 pixel-wide fully-flexible smart chasing LED strip ideal for creative applications – on the brand ident artwork for the 2013 event designed by Thomas Matthews. This was present throughout the exhibition in various different permutations.

The Video Flex was recessed into a series of custom curved ceiling panels optimised by Gray so that when mounted within, the pixels illuminated these perfectly evenly and emitted the maximum amount of light.

These panels were fabricated by set builders Firecracker Works, who were also involved in the overall design and integrated into sections of the tunnel’s overall structural framework. The result was that when the panels were lit in the dark tunnel, the colours and texturing looked like liquids flowing and moving through the space in mid air.

“The idea was based on some simple visual trickery and theatrical techniques which were absolutely ideal to produce the desired effect,” explains Gray, adding “I wanted people to feel the energy and kinesys and also a sense of magic, the unknown, excitement – all these emotions – as they traversed the tunnel and became immersed in the work”.

He created custom video content that was mapped exactly to the shape of all the pixel panels in the roof of the tunnel when finally in place, which was then manipulated to produce the bold, vibrant colours and specific texturing that Gray wanted to achieve.

The video files were stored and replayed using an AI server, triggered from Renegade’s Hog 4 lighting console which was used for programming the colours and effects, with all data running over ArtNet.

The AI was chosen by Bryn Williams of LED lighting installation specialists Light Initiative, whom Gray has worked with before and on this occasion supplied the video server and a team to assist with the build. He also brought in Lighting Designer Dan Hill to assist with programing the colourscape.

At the exhibition end of the tunnel, Gray lit a 2-way mirrored display box filled with a selection of furniture. This was the first thing that visitors saw as they started making out the objects at the end of the tunnel. Eight Mac 101 LED wash fixtures illuminated the box internally, and when these went off, the mirrored surface reflected a reverse angle back down the tunnel.

“It was the juxtaposition of these different lighting textures that helped heighten the sense of anticipation,” describes Gray.

The installation was a massive hit with the public and one of a number of video artworks that Gray – also well known for his fashion and rock ‘n’ roll lighting designs - has produced this year.