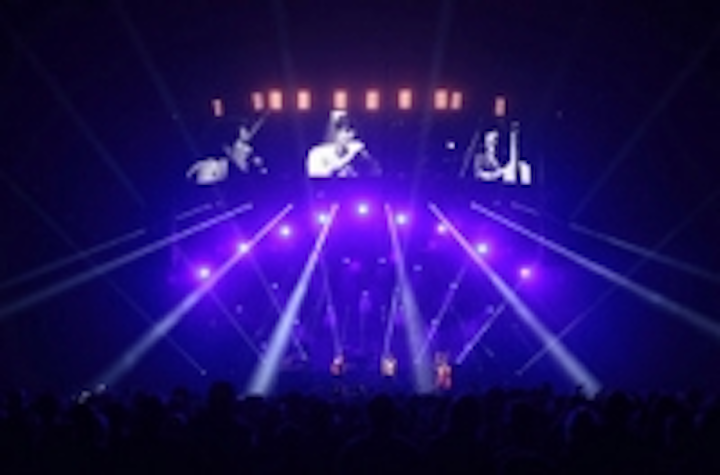 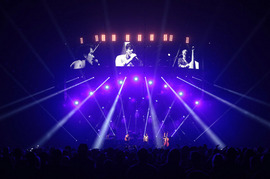 The versatile FX-200s were specified by Lighting and Visuals Designer Ed Warren from Next Level Lights.

The small opaque plastic balls encase LED clusters and can be fitted together and configured to suit any design. They are ideal for bespoke applications and offer twice the brightness of similar LED spheres. An IP65 rating makes the FX-200s ideal for both indoor and outdoor applications.

The band have been touring for the last three years with various different arrangements of tungsten lightsources over and around the stage as an integral part of the lighting rig.

Earlier in this tour, Warren introduced LED festoon lighting, going from the stage and reaching right out into the audience … and he wanted to take this up another level and add another dynamic and adaptable lightsource to the mix – enter the FX-200.

He had seen the product in action at various festivals over the summer and thought it ideal for the next evolution of his design. “I wanted something far more than just a standard light bulb or lightsource, and something that could produce high-impact low-res effects like the stars at night or burning embers”.

Apart from that, he needed to be able to get a good tungsten to match and complement the rest of the lighting aesthetics.

The FX-200s were mounted on small different length steels and hung on two independent trusses. Their layout and where they were positioned onstage was critical to the rest of the lighting rig, and when in position they brought two distinctive additional curved visual layers to the stage.

Content from a Catalyst media server triggered from Warren’s Chamsys MQ100 console was run through all the FX-200 balls which certainly brought the desired whole new dimension to the show, “But without it being too elaborate or over-done,” confirms Warren.

The more complex FX-200 effects in the show included spinning and chart-wheeling impressions for “I Will Wait” and an arc-like rising sun accompanied by bouncing sun-beams from the VL3500 moving lights in “Awake My Soul”.

‘Crowning’ the top of the stage were three of XL’s Pixled F11 LED screens, an 8 panel wide by 3 deep section in the centre, flanked by two sections of 3 x 3 panels wide per side. These were originally suggested by Rob Sinclair, Visual Consultant for this leg of the tour, which was also the band’s first in UK arenas since they shot to prominence in the last year.

XL supplied a 2ME Grass Valley HD Kayak mixer and full PPU with five Sony HXC100 HD cameras – two positioned at FOH, two in the ‘pit’ and one onstage, plus four Sony BRC H700 Robo-cams stations around the drums and piano - for the IMAG mix directed by Woody.

XL’s crew chief was Al Bolland, described by Ed Warren as “A legend!” He was joined by Myway, Steve Jones, Steve Clarisse, and Connie Glover on the road, and the tour was Project Managed for XL by the equally fabulous Jo Beirne and Phil Mercer.

Warren sums up, “XL put a lot of time and effort into prepping this elaborate rig and the commitment and professionalism of the crew was exemplary. I’d been wanting to work with Jo (Beirne) for quite some time, so it was good to finally get the ball rolling!”