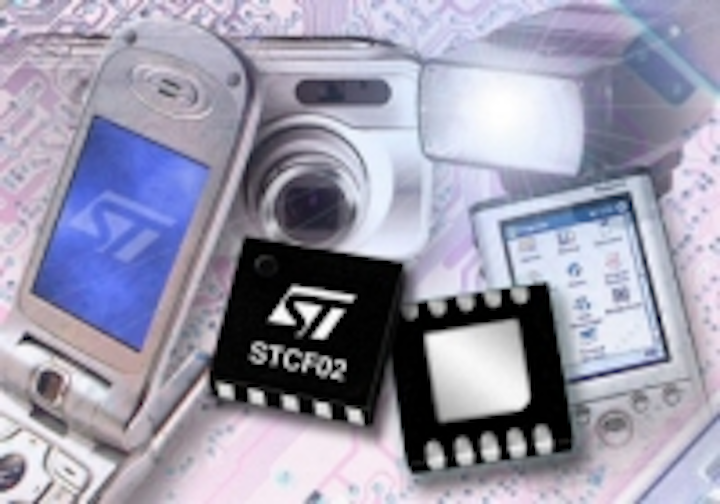 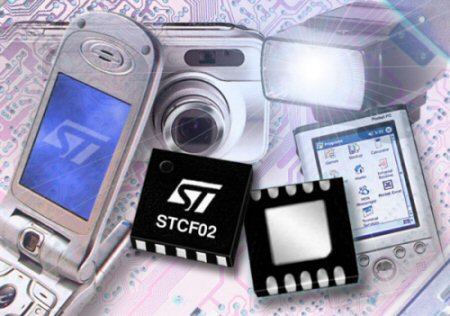 Geneva, October 3, 2005 – STMicroelectronics (NYSE: STM), the world’s leading supplier of analog application specific products*, has introduced a new power-supply IC, the STCF02, that is specifically designed to drive the high-current white LEDs used for flash illumination in the latest generation of mobile imaging equipment such as cameras for mobile phones, digital still cameras, and PDAs. In addition to supporting the higher flash illumination powers required by the latest high-resolution image sensors, the device extends battery life thanks to the extremely low standby current of less than 1 microamp that it draws during shutdown mode, one-sixth of the power consumed by alternative devices. The STCF02 also incorporates comprehensive protection circuitry, including, uniquely, the ability to automatically sense and respond to excessive LED temperature.

The currently available approach to the camera-flash LED is based on two topologies: multiple white LEDs connected either in series or in parallel. Both topologies are considered adequate for cameras up to 1.3Mpixels even though the maximum distance between the subject and the camera flash range from 0.5m to 1m to obtain a good image in low-light conditions.

However, for the latest generation of mobile phones with higher Megapixel resolution, higher-power flash is necessary and the preferred solution for these cameras is to use a single, high-power white LED.

The STCF02 is a high-efficiency (85%, typical) buck-boost converter that is able to deliver a controlled current to a single high-power flash white LED. Accurate current control over the range of battery voltages is essential as the white LED’s light output is proportional to the current flowing through it.

The STCF02 controls the current by automatically changing the operating mode between buck (step down) and boost (step up) to accommodate the forward voltage of the white LED according to the battery voltage level. The device uses a PWM (pulse-width modulation) control scheme with a switching frequency of 1.8MHz and provides a regulated output voltage ranging from 2.5V up to 5.3V powered from a single lithium-ion battery. Three logic-input signals allow the selection of four different operating modes: Flash, Medium Flash, Torch, and Shutdown. Flash-, Medium flash-, and Torch-mode currents are set by external resistors. In shutdown mode, the LED is disconnected from the battery, cutting-off any leakage current drawn from the battery.

To ensure reliable operation, the STCF02 integrates electrical and thermal protection circuits. Should the inductor current exceed an internally set current limit (2.3A), the PWM controller turns the internal power switch OFF until the next PWM oscillation occurs. The device includes output over-voltage protection (OVP) that stops the operation of the PWM controller when the OV is detected. Normal operation is restored automatically when the output voltage falls below an internal fixed value. An internal thermal shutdown protection circuit switches the device off if the junction temperature exceeds 140°C. In addition, since the STCF02 is also able to sense the white-LED temperature by means of an external negative temperature coefficient (NTC) sensor, if an excessive white-LED temperature is detected, the device is switched OFF. Alternatively, an external RC delay cell can be used in place of the NTC to limit maximum flash duration to a safe time.

Thanks to its buck-boost smart dual-control mode and the high output power capability, as well as its outstanding conversion efficiency, the STCF02 is the optimum fully integrated solution to drive the high power white LED used in the new generation of high-resolution camera sensors. The STCF02 offers the maximum allowable W-LED power to be extended to 3W, while the maximum distance between the subject and the camera is increased to 1.5m.

The STCF02 will be priced at US$1 in 5 to 10,000 piece quantities. Samples are currently available, with volume production imminent.