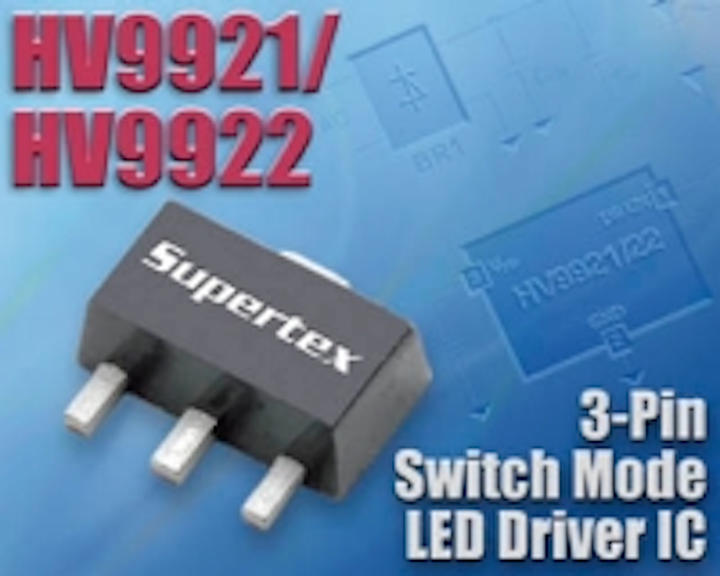 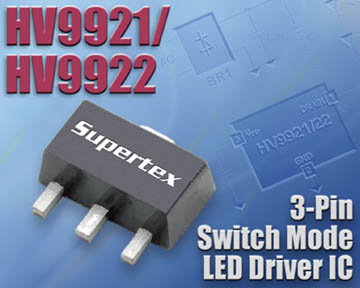 Supertex, Inc. (Nasdaq: SUPX) today released the HV9921/22 family of 3-Pin Switch-Mode LED Driver IC's. With the MOSFET (or Power Switch) integrated to the IC, the HV9921/22 family allows for high efficiency driving of low current LEDs in signage or general lighting applications. The regulated LED current is internally fixed at 20 mA for HV9921 and 50 mA for the HV9922.

HV9921/22 has an operating range of 20VDC to 450VDC, which allows for universal AC input operation of 85VAC to 265VAC. The HV9921/22 is a pulse width modulation (PWM) controller and driver IC used in a buck (step down) converter topology. It utilizes peak current-mode control in the buck converter topology to allow ease of use, requiring no compensation. It also uses fixed off-time operation of the MOSFET, which allows the HV9921/22 to drive LED string voltages to approximately 80% of the input voltage. Its internal MOSFET is rated at 500V, which can meet universal AC input transient requirements.

Because HV9921/22 is a switch mode driver that offers high efficiency, it can be placed in applications where space, size, and thermal considerations are at a premium. Applications include: incandescent bulb replacements, low profile traffic and transportation signs, and LED light strings replacing neon light signages.