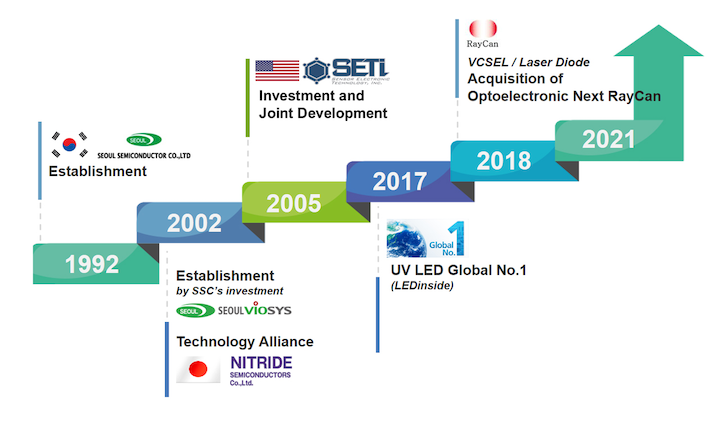 The California Northern District federal court issued a permanent injunction against the sales of an accused UV LED sterilizer device, as well as any mere colorable variations, according to the parties’ stipulation. The Court will therefore prohibit the sale of similar products if they prove to be mere colorable variations of the accused products.

Bolb is a UV LED company co-founded by former SETi employees, and Q-Egg was the distributor of the accused UV LED sterilizer device.

The UV LED market has expanded to a range of fields, including air and water purification devices, as well as medical and bio devices for skin care. The UV LED market value will grow up to $1.2 billion in 2022 according to a market report from LEDinside (2018).

SETi has also collaborated with South Korean UV LED company Seoul Viosys Co., Ltd. (“SVC”), resulting in the development of Violeds technology for UV LED-based disinfection, deodorization, phototherapy and curing. Violeds technology has been used by the US National Aeronautics and Space Administration (NASA) aboard the International Space Station (ISS). SETi also supplies UV LED products to America’s largest heating and cooling manufacturing brand company. This product has been recognized by customers for its high performance in sterilizing various bacteria that live inside air conditioner equipment and preventing it from spreading inside a home or office during operation.

“It is difficult to survive on a long-term basis in the UV LED industry without a strong foundation in intellectual property and technology expertise, something that SETi and SVC have gained thanks to their extensive investment in research and development,” said Chae Hon Kim, CEO of SETi.

“SETi believes in furthering a market of fair competition and investment in intellectual property. We believe that this rewards research and development, allowing entrepreneurs and small businesses to have their hard work recognized in the marketplace. We also believe in the importance of green technology. As a UV LED pioneer developing commercialized UV LED for the first time in the word, we plan to make our products available at even more competitive pricing to encourage the distribution of our green technology products in the market, thereby contributing to a clean and healthy environment,” added Kim.

Semicon Light Co, Ltd., an investor of Bolb, did sales promotion for the accused UV LED and sterilizer device UV LEDs in Japan and other countries.

Sensor Electronic Technology, inc. (SETi), a division of Seoul Semiconductor and Seoul Viosys, is the world’s leading supplier of deep UV LEDs (emission wavelengths shorter than 340nm), as well as a broad portfolio of UV-B, and UV-C LED products and application solutions. SETi UV LEDs are certified to AS9100D with ISO 9001:2015, and the company is committed to meeting and exceeding the needs of customers and stakeholders through the highest level of quality management. To learn more, visit http://www.s-et.com/en/.

Seoul Viosys is the world’s first UV LED solution provider. Established in 2002 as a subsidiary of Seoul Semiconductor, the company developed EPI, FAB, and UV LEDs. In 2005, it produced UVC LEDs of 275nm, 310nm and 340nm for the first time in the world. In 2007, it achieved mass production of Deep UV LEDs for 255nm~340nm and has become the only company to produce UV LEDs of all wavelengths. Seoul Viosys has more than 6,000 patents related to UV LED technology. Its UV LED modules provide strong sterilization and disinfection (UVC), skin regeneration (UVB) and effective cultivation for horticulture. It is an eco-friendly and healthy product with no harmful chemicals unlike conventional mercury lamps. The key products have been applied to applications for water/air purification and sterilization are opening new application possibilities for horticulture, residential, commercial, water treatment facilities, health care, and even automobiles. To learn more, visit http://www.seoulviosys.com/en/.