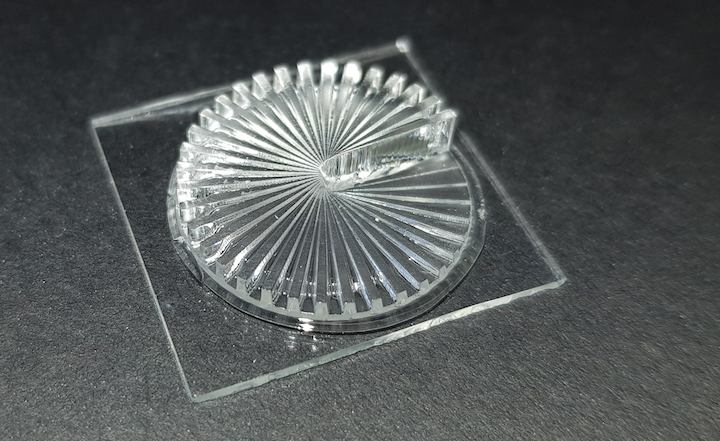 Individually manufactured and still suitable for mass production? Within the framework of the Fraunhofer "Go Beyond 4.0" project, this apparent contradiction is to be eliminated. In the field of illumination optics, the two Fraunhofer Institutes for Silicate Research ISC and for Optics and Precision Engineering IOF developed new material concepts and processing technology for multifunctional and individualized optical components for “lot size 1”.

The starting point is the relatively easy customizable 3D printing technology. Disadvantages of three-dimensional printing so far, however, were the disturbing effects in the volume and on the surfaces of printed objects, such as layering artifacts or roughness. Furthermore, the material properties of conventional 3D-printable polymers are usually insufficient for advanced optical components and systems.

High demands are placed on optical systems in the field of lighting. The materials used should be as glass-like as possible, with no yellowing during long term operation and a high transparency in the visible part of the spectrum. Artifacts or inhomogeneities in the printed volume caused by the layer-by-layer processing and not very smooth surfaces due to printing structures on the micrometer scale are unacceptable for use in optical systems.  However, with ORMOCER®s – glass-like inorganic-organic hybrid polymers - from the Fraunhofer ISC and an improved printing technology from the Fraunhofer IOF, a leap in optical quality could be accomplished. Specially adjusted optical ORMOCER®s have already been used in the area of ​​optical assembly and connection technology by the Fraunhofer ISC scientists. "The initial material has had very good optical properties at all. Due to further development it was refined for the enhanced 3D printing process, as provided by the colleagues of the Fraunhofer IOF. The combination of material and technology avoids defects on surfaces and in volumes that would otherwise result from 3D printing", explains Dr. Sönke Steenhusen, project manager at Fraunhofer ISC.

In addition, other required functional components such as apertures, electrically conducting tracks or mirrors can be integrated into the printed optical components during the manufacturing process. This simplifies later assembly and enables highly complex optical components. Thus optical systems can be created easily by combining optical ORMOCER® and digital manufacturing processes. Thus, the printed optics are also interesting for advanced lighting tasks, which couldn’t be realized so far by other means. For larger quantities, the Fraunhofer researchers are already working on the parallelization of processes.