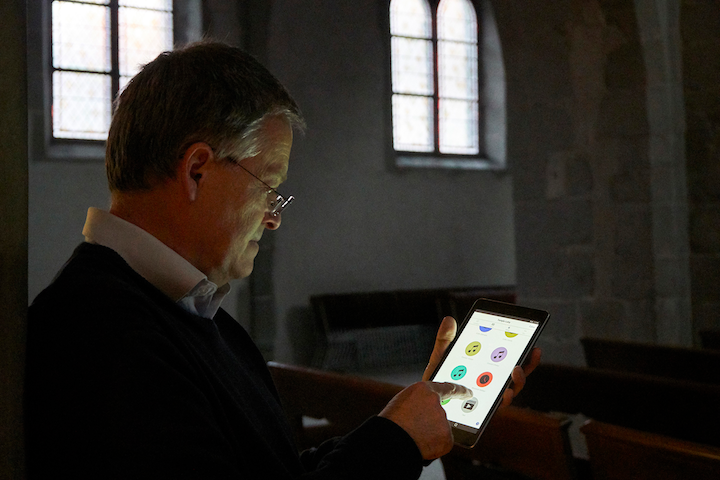 In a recent upgrade of the lighting to LED technology at the Temple de Lutry, Switzerland, stringent guidelines had to be adhered to as the church dated back to the 11th century and is a cultural asset of national importance.  A modern lighting control system was however implemented along with wireless technology from Tridonic.

The Swiss municipality of Lutry on the shores of Lake Geneva is a picturesque little town and an important landmark is the Temple de Lutry, the reformed parish church of Saint Martin in the centre of the old town. Originally built as a church for a Benedictine priory in the 11th century, numerous alterations and extensions have been made to the building over the centuries and the Temple is also home to decorative 16th century paintings inspired by Mannerism and Renaissance in the vaults of the nave by artist Humbert Mareschet.

Since last Autumn, not only the precious paintings but also all the other architecturally interesting details of the church have appeared in all their splendour, because Saint Martin has been equipped with a modern lighting solution. The people in charge at Lutry’s Service de l’aménagement du territoire et bâtiments above all expected significant energy savings and reduced maintenance costs from the upgrade of the existing halogen lighting to LED lighting. In addition, they wanted to have a control system that would make it easier to adjust the lighting to the different uses of the church.

To put these requirements into practice, Senseco, the lighting design office from Lausanne commissioned to carry out the work, had to overcome a difficult challenge, however. “Under no circumstances were we allowed to interfere with the historical structure of the church,” explains Yannick Le Moigne from Senseco. “Laying additional power or data cables was taboo so we solved the problem with a wireless lighting control system.” Each light point is now equipped with a basicDIM Wireless control module from Tridonic, acting as a node in a Bluetooth network with a mesh structure.

Thanks to the compact 50 x 26 x 33 mm Casambi Ready basicDIM Wireless modules, setting up a light management system is very easy. Once connected with the LED drivers of the luminaires to be controlled, they automatically establish a network with up to 127 light points in which they then communicate switching and dimming commands. The modules come with a configurable 1‑10 V interface and a DALI interface as well as a switchable relay contact. Optional sensors can be integrated. What’s more, the networked luminaires can be grouped together and scenes can be created.

The church is equipped with various lighting components. In the nave, there are large circular luminaires featuring separately switchable direct and indirect lighting. On the cornices of the pillars, compact spotlights were placed that illuminate the severies with wide beams or trace the contours of ribs and arches as narrow-beam strip lighting. There are also a number of single luminaires around the organ, the choir, the altar, the side aisles, the pulpit and the entrance area. Senseco project manager Nadine Le Moigne highlights the benefits: “Thanks to the light management system, all these light points can now be set up in any combination and with individually preset parameters to create different lighting scenes and can be tailored precisely to the relevant application.”

These configurations can then simply be saved as a lighting scene. In the church there are scenes for services, for musical and literary events in the choir or the nave, and for the popular Bach concerts. One tap of a finger in the app is enough to retrieve the desired scene. There is also the battery-powered basicDIM Wireless User Interface. This low-profile device in a switch format can be used to store four scenes and fade luminaires up and down.

An elegant solution could also be found for a very special switch: when visitors want to visit the church, they can turn on the lights themselves with a pushbutton in the entrance area and start their tour. An approximately eight-minute lighting scene is programmed which illuminates the church and the ceiling paintings and slowly dims down at the end. To avoid interfering with services or events, it was important to ensure that the “tour” scene could only be activated if no other lighting scenes were active in the church.

This was achieved through the DALI-RM/S actuator from Tridonic in which a DALI signal controls a relay contact. “We have wired a basicDIM Wireless module to the DALI input of the actuator which is integrated in all the lighting scenes in the church. The visitor button is connected to the relay output of the actuator via another basicDIM Wireless module,” says Maurizio Cucciniello from Tridonic and adds: “Whenever a lighting scene is active for church services, the basicDIM Wireless of the visitor button is disconnected from the network via the DALI RM/S.” So if the button is pushed now, the switching command cannot be passed on and nothing happens. Only when the “tour” lighting scene is once again activated with the user interface or tablet can it be accessed again using the button at the entrance.

Without interfering with the historical structure, a light management system could be implemented in the Temple de Lutry using basicDIM Wireless. The lighting control which communicates via Bluetooth was remarkably straightforward to programme and put into operation. Both the pastor and sacristan, as well as all the other users such as the organisers of concerts and readings, are happy about this significant increase in convenience, because with the tap of a finger they can now select lighting scenes for the entire church or adjust individual luminaires or luminaire groups to suit their requirements. Thanks to the button at the entrance, visitors can enjoy the church with its impressive ceiling paintings in a bright light even when there are no events

Tridonic is a world-leading supplier of lighting technology, supporting its customers with intelligent hardware and software and offering the highest level of quality, reliability and energy savings. As a global driver of innovation in the field of lighting-based network technology, Tridonic develops scalable, future-oriented solutions that enable new business models for lighting manufacturers, building managers, systems integrators, planners and many other types of customers.

To promote the vision of the “Internet of Light”, Tridonic relies on partnerships with other specialists. The goal is the joint development of innovative technological solutions that convert lighting systems into intelligent networks and thereby enable associated services. Its profound, technical industry expertise makes Tridonic an ideal partner for established brands and for newcomers to the market.

Tridonic is the technology company of the Zumtobel Group and is headquartered in Dornbirn, Austria. In the 2017/18 tax year, Tridonic generated sales of €352.7 million. 1,690 highly skilled employees and a worldwide sales presence in over 50 countries reflect the company’s commitment to the development and deployment of new, smart and connected lighting systems.