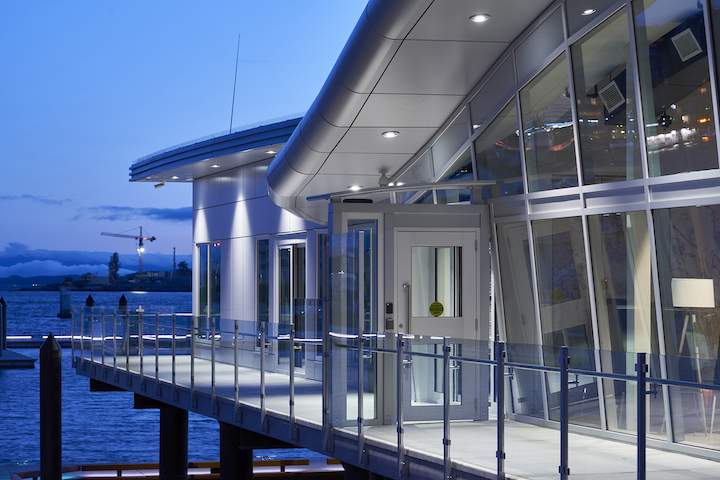 Victoria International Marina is the first of its kind in Canada, a world-class custom-built moorage for luxury super yachts.  Located in Victoria Harbour, steps away from the downtown core, the 28-ship facility welcomes passengers and crew from all over the world.

The facility consists of two 7,000 sq.ft. buildings which mirror each other in shape and design. The western building is the operations center, with conference space, crew amenities, marina offices and harbor authority. The eastern building hosts the Boom & Batten restaurant. Both are accented with a sloping roof that forms a canopy over the surrounding dock.

CDM2 Lightworks/Vancouver Island was brought in to consult on the marina’s lighting. They were presented with very specific requirements for the exterior lighting, and in particular the luminaires that would be installed in the sloping canopy overhangs of the two buildings.

“We were looking for form and function,” said Russell Mackie, a member of the CDM2 Lightworks team. It was vital that light was delivered exactly to the marina dock below without any light trespass.  The fixtures had to be able to withstand the severe weather conditions of the Pacific coast and sustainability was key. The lighting also had to complement the luxury finishes and aesthetics of the marina.

The design team selected Luminis’ Oculus OC750, a recessed downlight, for the building canopies; a total of 65 fixtures were installed in the two buildings. “This optic was the only one of its kind on the market, ticking all the boxes we needed for this project,” said Mackie.

The adjustability of the Oculus light module within its main housing made it a compelling choice for the marina overhang. Taking advantage of the optic’s tilting mechanism and 360° adjustable rotation, it was possible to manipulate the angle of illumination in each fixture along the canopy’s curve to parallel the surface they were illuminating. The result is illumination that is directed precisely down to the dock below, ensuring excellent visibility and safe passage for marina employees and yacht passengers.

Equally important, there is no light trespass beyond the marina buildings. Because the facility faces onto a public walkway and residences beyond, the project engineers had required that the selected luminaires provide superior optical control so that lighting would not spill over to land or the harbour itself. Oculus’ 30° optic precisely delivers 3,500 lumens exclusively to the marina docks.

Extreme wind and water conditions were also a factor in choosing the exterior lighting.  Mother Nature throws a lot of challenges at the Victoria Harbour location. “Waves crash over the docks. And horizontal salt water gets thrown against the marina buildings with the wind,” noted Mackie.  With an IP66 rating, everyone was confident that Oculus could withstand the harsh weather conditions.

Sitting on Canada’s pristine west coast shoreline also meant that the marina owners were committed to preserving the harbor and the local environment. The green facility was constructed with sustainable solutions wherever possible, including Luminis’ Oculus. Its LED light module is designed for optimal heat dissipation and lighting performance.  Its durability and a lifetime beyond 70,000 hours ensure the marina can anticipate low maintenance and a significant contribution to their overall energy savings.

Aesthetically, the entire team could not be happier with the result. Mackie said, “Oculus fits perfectly into the arched design of the building and accentuates the beautiful lines of the architecture.”

Victoria International Marina’s mission statement includes ‘creating remarkable experiences’ and one imagines that passengers and crew arriving at this unique Pacific Northwest facility can expect just that, through upscale amenities and services, and superior well-illuminated docking facilities, no matter the weather.