LED MR16 lamps generally lag legacy halogen lamps in lumen output and CBCP, and the DOE found sparse choices in high-CRI lamps when purchasing products on the commercial market for a Caliper report. 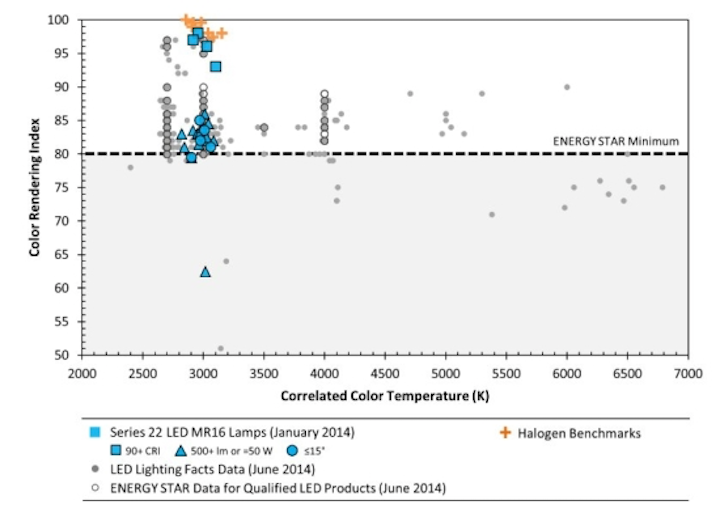 LED MR16 lamps generally lag legacy halogen lamps in lumen output and CBCP, and the DOE found sparse choices in high-CRI lamps when purchasing products on the commercial market for a Caliper report.

The US Department of Energy (DOE) has released a Caliper Application Summary report focused specifically on LED-based MR16 directional lamps. The agency tested 27 lamps with a focus on attributes required in applications such as hospitality and retail as opposed to usage in general ambient lighting applications. The new report finds that the solid-state lighting (SSL) alternatives generally fall short of legacy halogen lamps in areas including total lumen output and center beam candle power (CBCP). 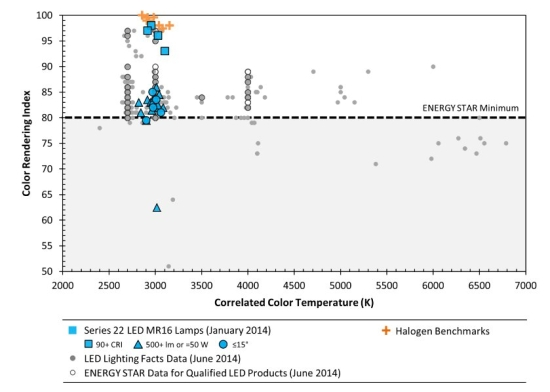 The new report is part of the DOE's Series 22 set of reports that are evaluating different lamp types. The Caliper process includes purchasing products anonymously from commercial suppliers just as any lighting designer/specifier would, and testing the products in a laboratory setting.

The shortcomings in the LED MR16 space have certainly been foreshadowed. In a Caliper report released earlier this year focused on products for retail application, the MR16 category lagged the performance of other directional LED lamps including PAR30 products.

The new Caliper report covers far more products than the prior study on multiple lamp types. The DOE set out to purchase 3000K-CCT lamps with flux output of at least 500 lm or an equivalency claim to 50W or greater halogen lamps. The agency also sought to purchase 90-CRI lamps, although the DOE only found four manufacturers offering such products when the lamps were purchased in the early part of 2014. The agency further sought a set of lamps with a specified beam angle of 15° or less — an attribute desired in retail lighting applications where the beam is focused on a specific product.

Of the group of 18 lamps that either were rated at greater than 500 lm or featured an equivalency claim of 50W halogen lamps, most failed to deliver the output or CBCP of a 35W halogen lamp. The DOE noted that performance has improved across the board relative to MR16 lamps tested previously, but the LED lamps still trail legacy lamps by a significant margin.

The four high-CRI products tested also exhibited significant efficacy penalties in delivering better color performance. The mean of the four was 51 lm/W, although one product stood out at 69 lm/W. The remainder of the lamps tested in Series 22 had a mean efficacy of 64 lm/W.

The DOE was only able to buy five lamps with a beam angle of 15° or less. But the DOE reported that none of the tested lamps could match the Energy Star-predicted CBCP of 50W halogen lamps. Moreover, the agency speculated that lighting specifiers would prefer LED lamps with even narrower beam angles in the 4° range.

Clearly, the industry has a way to go to deliver suitable SSL alternatives for MR16 lamps. The DOE noted that it had selected the MR16 category for test specifically because of the challenge incurred in packing the LED and driver electronics in such a small lamp form factor. The tested lamps do deliver a significant efficacy advantage relative to halogen alternatives.