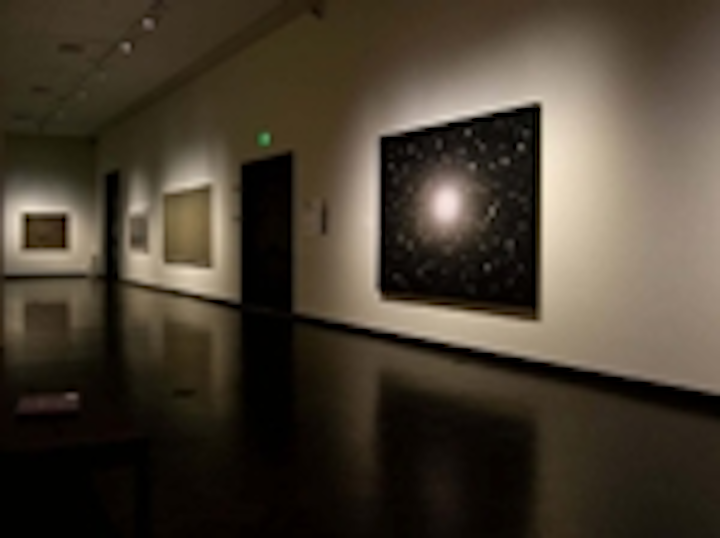 The US Department of Energy (DOE) has published the final Gateway report from a retrofit of track lighting used to accent a gallery exhibition at the Jordan Schnitzer Museum of Art (JSMA) in Eugene, Oregon. The project involved the replacement of fifty-four 90W halogen PAR38 130V narrow flood lamps with 12W LED PAR38 lamps, resulting in energy savings of over $500 per year and a payback period of 9 years. This is the second such project this year, with the first Gateway study reporting superior quality of light and lower energy use using 12W LED PAR38 lamps relative to 15W and 23W CFLs and also 90W halogen PAR38 lamps. This new study is similar in that 12W LED PAR38 lamps were again tested. In the recent study, a museum evaluated LED lamps from four manufacturers and chose the Cree LED PAR38 as it offered versatility and high color consistency from lamp to lamp. Fifty-four lamps were installed in January 2011 in the Coeta and Donald Barker Special Exhibitions Gallery to illuminate the digital photographs from artist Chris Jordan.

Energy use and ROI

The 54-lamp LED system uses 14% of the energy and offers a ten times longer lifetime than the halogen lamps. The present value life-cycle cost of the LED system was calculated to be $12,124 compared to $16,670 for the halogen system.

Energy use for the 54 track heads lamped with LED lamps was estimated at 1403 kWhr per year compared to 9851 kWhr with the estimated number of halogen lamps required for the same lighting effect (44 lamps). At the electrical rate of $0.06 per kWhr, which is low because of the local hydroelectric power source, this translates to an estimated savings of $506.84 per year for the gallery.

Payback rates are expected to improve further as the industry works to reduce the price of LED replacement lamps. At the time of this study, the LED PAR38 lamp cost $108 each.

In this Gateway study, a separate comparison was staged between the museum’s standard halogen lamp and three LED PAR38 replacement lamps from three different manufacturers to measure the acceptability of LED lighting. In the nearby Gordon Gilkey Study Center Gallery, clusters of similar art were mounted on a single gray wall, including an oil painting, a black-and-white photographic print, and a color-checker card. Each cluster was illuminated with one of four lamps, the halogen one of the LED lamps, all with color temperatures ranging between 2638K and 2821K.

Artists, museum staff and visitors answered survey questions regarding smoothness of light pattern, appropriate warmth/coolness of light for the art, color rendering, visual clarity and suitability of the lighting for the artwork.

The artists and museum staff preferred a different LED lamp than the visitors did, but neither party preferred illumination by the halogen lamp. Observers said they appreciated how the LED lamps improved the ability to see blue colors.

Interestingly, the rank order of preference of lamps for color rendering did not correspond to the rank ordering of lamp CRI. This indicates that a new or modified color rendering metric may be needed for lighting designers who are illuminating artwork in galleries or similar environments.

Other recent Gateway studies have included one on T8 replacement lamps and another regarding LED replacements of parking lot luminaires at a Walmart as compared to pulse-start metal-halide luminaires.