Lighting Science Group and Light Prescriptions Innovators have developed an LED lamp which they plan to submit to the DOE for L Prize evaluation. 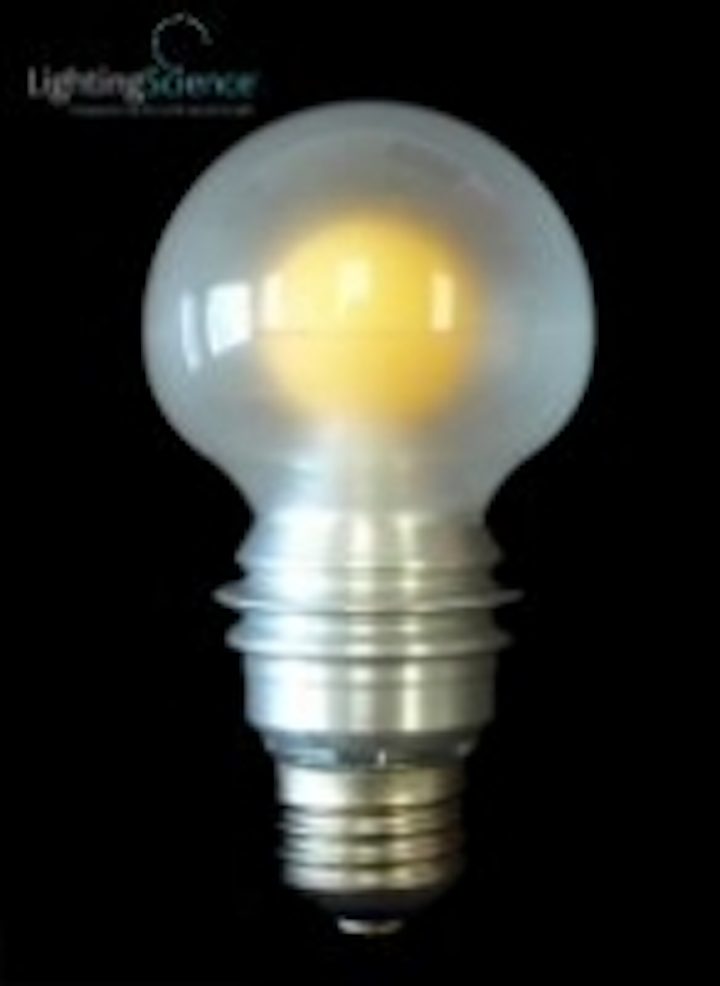 Lighting Science Group Corporation (OTCBB: LSCG), a Satellite Beach, Florida-based LED lighting manufacturer, has developed a 60-watt replacement LED lamp with Light Prescriptions Innovators, LLC (LPI), and plans to submit the device for the L Prize competition. The light-bulb design is based on patented and patent-pending technologies developed by both companies.

The L Prize was established by the US Department of Energy (DOE) to promote the development of highly-efficient, high-quality LED replacements for the traditional 60-watt light bulbs. An additional section of the L Prize, covering PAR-38 LED lamps, was temporarily suspended earlier this year.

Philips was the first to submit an L Prize entry in September 2009, and no other companies have stepped forward until now.

The L Prize’s stringent requirements and targets for the 60-watt incandescent LED replacement include efficacy of more than 90 lm/W, power consumption of less than 10 watts, output of more than 900 lumens; lifetime of more than 25,000 hours; color rendering index (CRI) greater than 90; color temperature between 2700 – 3000K; an even, omni-directional light distribution; and a consumer retail price starting at $22.

Fred Maxik, founder and chief technology officer of Lighting Science Group, said: “We are confident that our LED bulb developed in partnership with LPI meets or exceeds all of the criteria for the L Prize, making it a strong contender to win the competition, but we also believe that developing this product will further accelerate the transformation of the lighting industry to highly efficient LED technology.”

“This LED bulb will help accelerate America’s shift away from inefficient, dated lighting products to innovative, high-performance products,” said Roberto Alvarez, CEO and president of LPI. “We applaud the US government for challenging the industry through this contest to develop affordable and ultra-efficient LED bulbs that meet real-world user demands.”

Lighting Science Group says that it believes itself to be one of the largest worldwide suppliers of LED retrofit lamps, with the manufacture of more than one million units during the second half of 2010 alone.

In addition to a significant cash prize, the first manufacturer to fully meet the L Prize’s requirements will also be in consideration for federal purchasing agreements, utility programs and other incentives.

According to DOE, an LED replacement for the approximately 425 million 60-watt incandescent bulbs sold each year could save 34 terawatt-hours of electricity in one year, enough to power the lights of 17.4 million US households, and could avoid 5.6 million metric tons of carbon emissions annually.