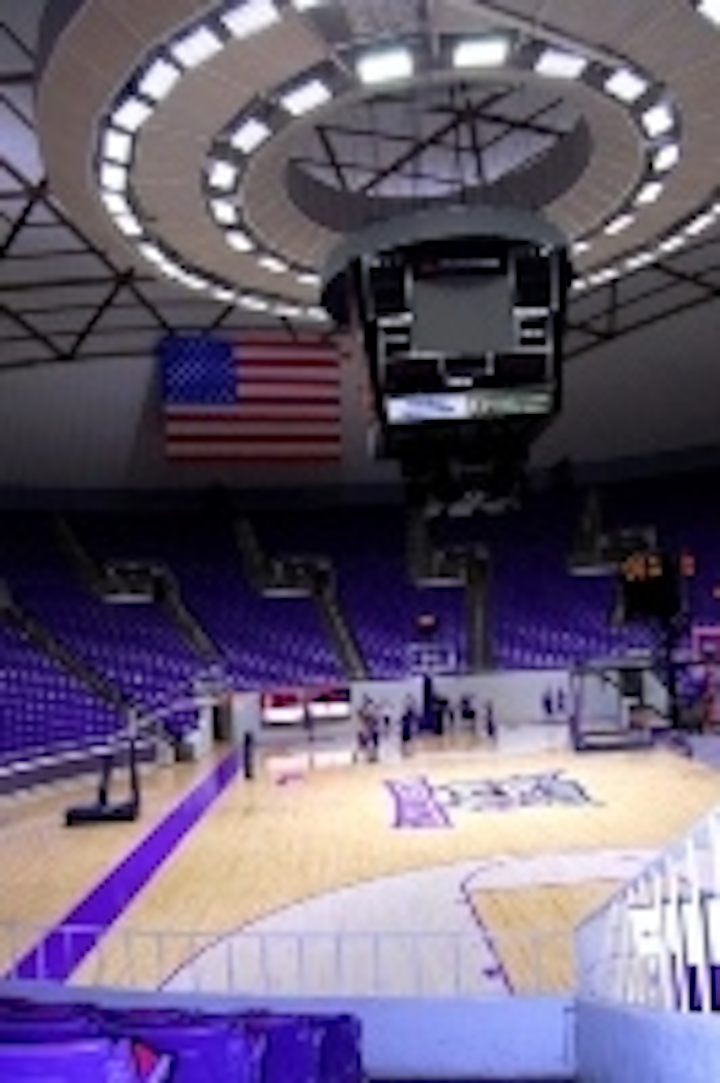 GE Lighting announced that its Albeo business unit, acquired in November 2012, has supplied 80 ABHX-Series solid-state lighting (SSL) luminaires to Weber State University in Odgen, UT to light the campus Dee Events Center. The LED-based high-bay fixtures will save the university $40,000 each year in energy costs, and reduce maintenance cost as well especially given that the lights are very difficult to reach.

Lighting sports venues is one of the last applications where LED lighting has made headway. There are many instances of major sports venues using SSL for decorative or entertainment purposes, or to light areas such as concessions or concourses. The Weber State projects, however, may be the most significant use of SSL products in lighting a playing surface.

The roadblock to LED usage in sports-venue lighting has been the light output required and the cost and weight of fixtures that can deliver the requisite light levels. Maturing LED technology has now made the technology feasible in lighting playing surfaces. And LEDs will never have the restrike problem that plagued the NFL Super Bowl after a minor power outage this past February.

GE would not directly address the cost of the fixtures supplied to Weber State, but instead made the point that it's total cost of ownership that is the key and that goes well beyond just energy savings. Product manager Omar Rivera said that it's hard to quantify the maintenance savings but that the former HID lights regularly required the university to perform the somewhat dangerous lamp replacement procedures on the lights mounted near the arena ceiling.

Rivera also said that the LED lights replace multiple light systems required when legacy sources are used in an arena. For example, most HID sources can’t be easily dimmed and brought instantly back to full brightness. So arenas typically use either a mechanical shutter system to dim HID lamps, or a complementary fluorescent lighting system.

The Albeo LED fixtures can dim to required levels instantly and return to full brightness instantly and are the only lighting system required in the arena. Indeed, Rivera said that the fixtures are mounted slightly on an angle so the main arena lighting also provides all of the lighting required in the seating areas. And the system can dim the lighting in the seating areas relative to the level on the playing surface.

The Weber State project utilized luminaires designed for industrial applications. Albeo modified the design, developing a bracket so the fixtures could be installed near the ceiling of the arena above and around the ubiquitous suspended scoreboard. The 80 fixtures replaced 100 HID fixtures.

At full power, the new lighting produces more than 200 fc on the basketball court — more than double what the US National Collegiate Athletics Association (NCAA) requires for college arenas. Arguably, the lights are too bright. But the installation supports nine dimming zones that will allow tuning of the lights for an optimum playing environment.

Jacob Cain, Weber State energy and sustainability manager, said that the prior HID lights delivered 60–150 fc with some di spots on the floor. The LED is more uniform, doesn't buzz or flicker, and can be dimmed instantaneously for special effects such as player introductions.

While the lighting quality has exceeded the university's requirements, it was energy efficiency that instigated the project. Cain's team begun by looking to see how other institutions had addressed excess energy usage in arena after documenting that the Dee Events Center was one of the largest power users on campus. The team found no prior usage of LEDs in similar arenas for comparison, but went through a fixture evaluation with Albeo's help and ultimately moved forward with the project.

"Month after month when the electric bill came for the Dee Events Center, all we could do was cringe and pay," said Cain. "The new high-bay lighting gives us brighter light with fewer fixtures, and we spend less money on energy. Now that's something we welcome and our teams and fans can appreciate."