Cree Lighting and Philips Lighting both announced 60W-equivalent LED lamps at less than $15, but the companies took decidedly different design approaches to the SSL retrofits. 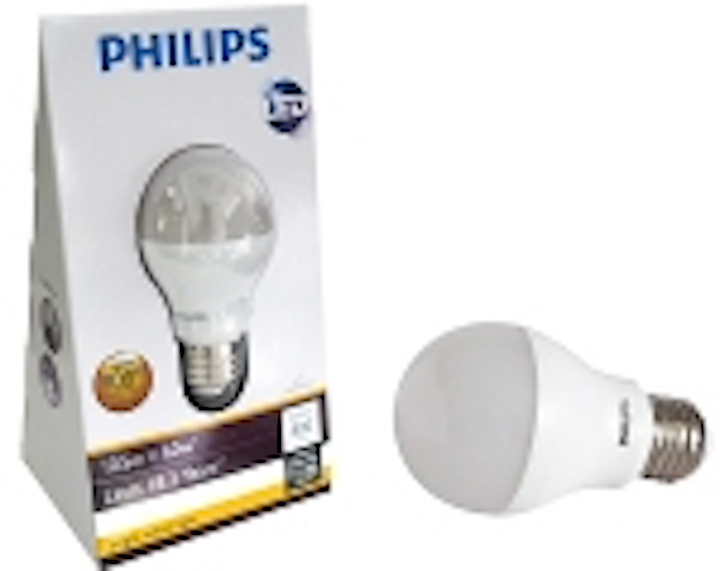 Cree Lighting has launched its first LED-based A-lamps featuring an omni-directional light distribution and dimming support, and ranging in price from $9.97 to $13.97. Philips Lighting, meanwhile has begun selling a 60W-equivalent lamp for $14.97 that only radiates over the upper hemisphere of the dome. Both of the companies produced designs with traditional incandescent lamp looks, but took very different approaches in the solid-state lighting (SSL) product designs.

The new products foreshadow the quickly approaching day when we see a 60W-equivalent LED lamp from a major vendor sell for less than $10. In fact, Philips Lighting CEO Ed Crawford promised that Philips would deliver such a product this year.

The Philips design eliminated dimming support to hit the low price point. The 10.5W lamp delivers 800 lm at a price of $14.97. For more information on both lamps, see our story on our Illumination in Focus website (www.illuminationinfocus.com/news/4/3/2).

Here, lets discuss the design approaches inside the new lamps. Philips has been widely known for its remote-phosphor technology in retrofit lamps. Even in the warm-white lamp announced last December, that's white in the off state, the company relied on an inner dome that was coated with remote phosphor (www.ledsmagazine.com/news/9/12/10)

The new 3000K lamps actually still use remote phosphor, although the geometry implied by the word remote has changed quite a bit. Crawford explained that the new lamps use blue LEDs with the remote phosphor applied on the dome of the individual packaged LEDs. In contrast, most remote phosphors are implemented on secondary optics. Meanwhile, phosphor converted LEDs typically have phosphor on the die inside the primary optic of the packaged LED.

The new approach certainly can reduce cost and improve optical efficiency by eliminating an optic between the LEDs and the outer globe. But does it maintain the advantage of remote phosphor? One key advantage is moving the phosphor material away from the LED where heat is generated that can cause the phosphor to shift in color over time. Crawford said that lessons learned in thermal management by Philips engineers allowed the company to reliably locate the phosphor on the LED.

The phosphor is actually deposited by Philips Lumileds in the back end of the LED manufacturing process. Crawford said, "It's so important for us to be a vertically integrated company" in discussing Philips Lighting's ability to bring such a product to market. Still ee would expect Lumileds to sell such LEDs to other SSL vendors at some point.

Cree, in contrast, took a more conventional approach using its phosphor-converted XLamp XT-E high-voltage LEDs. The LEDs are amounted on what Cree calls a Filament Tower that is a vertical structure upon which the LEDs are mounted in pairs around what is essentially a circular structure (see photo).

The concept of an LED filament, at least in usage of that word that comes from the incandescent world, is one that is being more frequently used in the SSL industry. At the recent Strategies in Light (SIL) conference, Intematix announced a small remote-phosphor optic that it calls a filament for A-lamps. Likewise, Epistar demonstrated reference designs that used strings of LEDs that president MJ Jou referred to as a filament. Clearly filament is quickly becoming shorthand for the light-engine assembly inside an LED retrofit lamp.

The Cree design is clearly a robust one based on a few days of usage. The dimming support works well. And the design seems to have no compromises despite the low cost. The light is uniform, and the 2700K version emits pleasant warm light.

Indeed the most interesting discussion about Cree's lamps comes down to what it cost the company to make them. The lamps use 20 LEDs arranged in 10 pairs. The XT-E LEDs cost $1.50 each in low volume. High volume customers are paying well under a dollar. Still Cree's internal manufacturing cost would have to be substantial – perhaps accounting for more than half of the price of the 60W-equivalent lamps.

The high-voltage LEDs would certainly simplify the driver design. Still the driver adds cost, as does the glass silicone-coated dome. And Cree is assembling the lamps in the US for now and backing them with a ten-year warranty. When all costs are accounted for, the profit margin has to be super slim. Indeed the prices listed above are retail at Home Depot, and the retailer has to get a cut as well.

Still Cree has taken much of the sting out of buying an LED lamp. Most people will see payback in about one year if the lamp is installed in a high-usage socket.