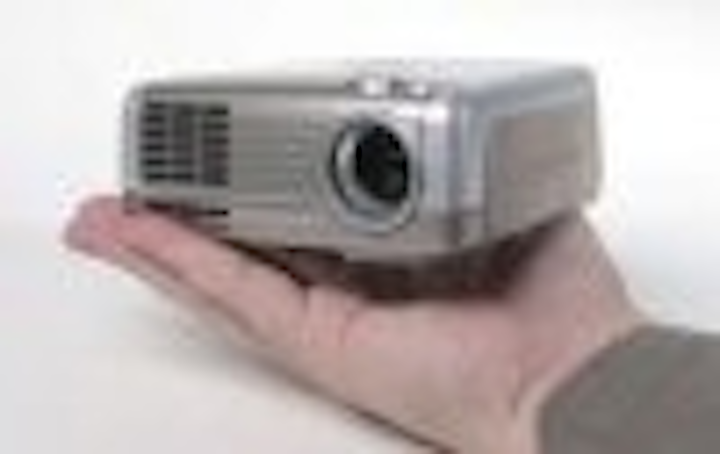 Weighing just 14 ounces and fitting easily into the palm of a hand or a coat pocket, the tiny projector is built for fun and creative applications, and can be battery powered or used with a universal car adapter.

The projector contains three Lumileds LEDs (red, green, blue) that produce an SVGA (800 x 600 pixels) image formed digitally by the latest DLP chip by Texas Instruments. The projector's advanced lighting technology is rated to last an unprecedented 20,000 hours; with an average use of five hours per day, the lamp is expected to last over 10 years.

The PocketProjector has one of the shortest projection distances of any mobile projector on the market today: users can easily create a 20-inch diagonal screen with only a little over a foot of projection distance, and a 40-inch screen image in less than a yard.

The PocketProjector powers on or off instantly for quick and easy start-up, and can display images from a notebook computer, portable DVD player, and gaming consoles for immediate use almost anywhere.

With a special suggested retail launch price of $699, the PocketProjector is described as "the next must-have gadget, and the coolest gift for 2005".

"Our new PocketProjector is one of the most advanced products I've seen in a long time," said Aki Ninomiya, vice president, Mitsubishi Digital Electronics America. "It establishes new standards and creates all new applications and markets for projection displays."

"For digital cameras, handheld gaming and portable DVD players, the PocketProjector is the newest display tool or toy of choice," said James Chan, director, projector product marketing for Mitsubishi Digital Electronics America. "This projector can go where no projector has gone before. Just imagine being able to whip out a big screen from your coat pocket - people are going to have so much fun with it."