Architectural: Pulsar lights a mine, i-Vision hits the ceiling

Pulsar lighting has been used in a nightclub in a mine in Mexico, while i-Vision fixtures have created a unique ceiling fixture. 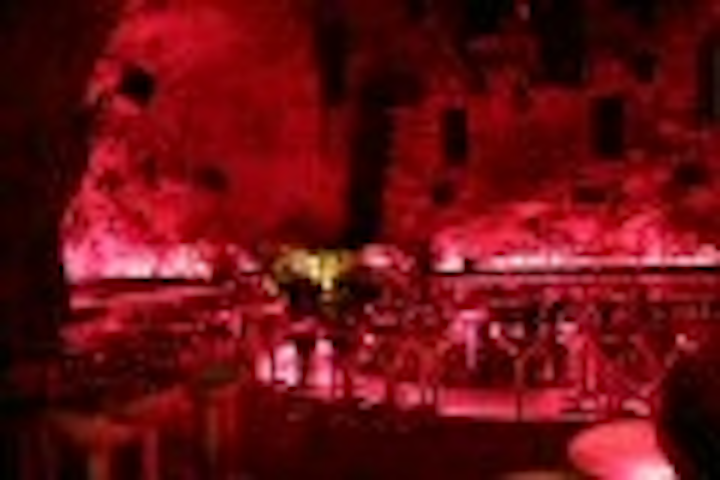 ChromaRange LEDs go underground The history of the Zacatecas Mine in Mexico goes back to the 16th and 17th centuries when excavations began in the search for rich silver and gold deposits. In 1975 the mine became a nightclub, but in August 2004 the club closed in preparation for a substantial remodelling project that was completed in June 2005.

José and Edson conceived the design of the mine project. It was essential that the illumination should not be overbearing and ruin the essence of the place - it is the rock that should stand out.

Remodelling was not an easy task because the place is solid rock on which conventional tools are practically useless. Twenty seven carefully calculated detonations of high and low explosives removed 1200 tons of rock, raising the capacity from 220 to 400. To enter the club, a small train with thirty people aboard travels 520 metres through a tunnel into the hillside. At the end of this journey you find yourself 315 metres underground, at the doors of this subterranean club.

The Tide is High for VSI

Vaughan Sound Installations – part of the PAI Group - has completed a sound, lighting and audio visual installation in the main function room of the Hi Tide pub in Porthcawl, a Welsh seaside resort, including the supply of LED fixtures for an audacious new ceiling lighting centrepiece.

DMP’s Andrew Skinner designed an eye-catching LED lighting feature in the ceiling of the room, to liven and uplift the space and become a talking point. The lighting feature resembles two elliptical flying saucers recessed into the ceiling, poised, ready for take off.

The strips have been carefully ensconced into the inner edges of the raised ceiling, and so are virtually invisible. There’s also a series of Lumos MR 16 RGB LED downlighters around the outer edges of the ceiling aperture.

The LED fittings together with an Anytronics Contractor pack dimming the house lighting are all controlled via a Sunlight controller located behind the bar with a simple to operate preset outstation.

In the centre of the ceiling feature is a fibre optic sculpture. In addition to the ceiling LED fixtures, VSI also boosted the existing dancefloor lighting with four GLP Junior Scan 2 moving lights and 3 Lumos LED Floods to highlight the stage area.