A major manufacturer of floor mats converts a rubber manufacturing plant to LED lighting, reducing energy use by 650 kWh per day and improving the light quality, reports Maury Wright. 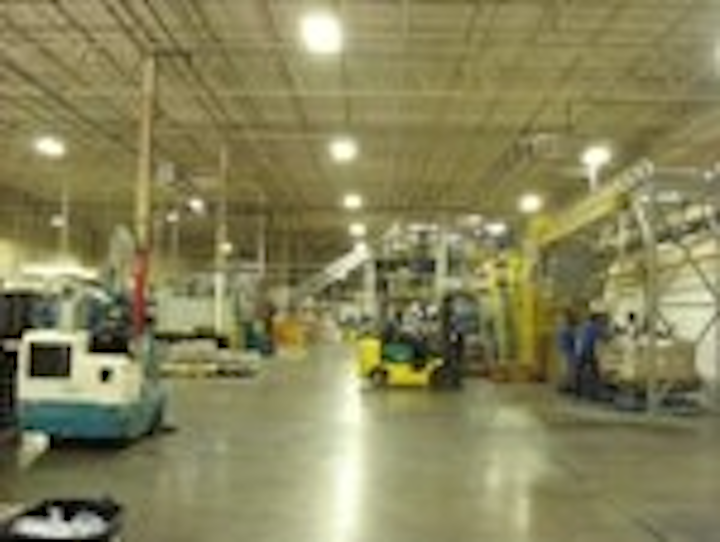 This article was published in the October 2012 issue of LEDs Magazine.

View the Table of Contents and download the PDF file of the complete October 2012 issue, or view the E-zine version in your browser.

Industrial lighting promises to be one of the next market segments in which LED-based solid-state lighting (SSL) begins to displace legacy HID sources and fluorescent lighting. High up-front costs have limited the adoption rate of SSL in such applications. But factory owners are beginning to grasp the advantages of LEDs, and realize that sometimes having the lights off is a good thing for the bottom line. A Georgia-based textile manufacturer in the US southeast recently converted one of its manufacturing plants to LED lighting, and positive results in energy consumption and projected maintenance costs led the company to immediately begin a retrofit of a second plant.

LED lighting has certainly succeeded broadly in many applications including street lights. In the industrial space, the success has come primarily in two areas – refrigerated facilities and warehouses. Indeed the technology is regularly used in refrigerated warehouses where the fact that LEDs don’t radiate heat is a good thing for the refrigeration system. And the warehouse angle is important because workers are only sporadically present in specific areas of a warehouse, so such installations can take full advantage of the dimming capabilities of LEDs based on occupancy sensors or networked controls. In fact, network lighting system specialist Digital Lumens has reported customers achieving 90% energy savings in cold-warehouse applications.

The case for LEDs isn’t quite so clear in the broader segment of industrial applications. In factories with workers spread around a manufacturing floor, there is often less of a chance to leverage dimming, because the workers need the lights. Moreover, some business owners simply have a mindset of wanting the lights on. Customers visiting a well-lit factory may perceive the lights positively thinking the factory is busy, and may perceive darkened areas negatively. But manufacturers such as Mountville Mills are willing to challenge those perceptions.

Mountville Mills is home-based in LaGrange, GA and is the leading manufacturer of floor mats in North America. The corporation also operates the Mountville Rubber Company that makes rubber used for the backing on the floor mats and for sale into other applications such as insulation for electrical wiring and boot soles.

Mountville president David Hart knew that the company needed to retrofit the metal-halide (MH) lamps located in a number of the company’s plants. The old lamps required regular maintenance and the light quality needed to be improved. But he was initially skeptical of LEDs because of the high up-front costs. He also wasn’t sure his operation could leverage dimming.

As SSL prices began to drop, however, Hart decided to install LED lights in one of the Mountville Rubber plants including a manufacturing area and a warehouse (Fig. 1). He became convinced that dimming would boost savings in the warehouse area, and that his own management team and visiting customers would soon realize that sustainable, energy-saving practices must become the norm rather than the exception. Hart said, “You have to adopt a new mindset and see dark areas of a facility as a positive thing for the business.”

The rubber-plant installation included 20,000 ft2 of manufacturing space and 60,000 ft2 of warehouse space. The facility houses more than 50 workers and produces 15 million pounds of rubber annually.

Prior to the retrofit, the manufacturing area was lit with 30 400W MH fixtures, and the warehouse was lit with 99 400W MH fixtures. Mountville engaged with Acuity Brands’ Lithonia Lighting via local distributor Mayer Electric Supply to contemplate the retrofit. The Lithonia team recommended the LED version of the I-Beam high-bay fixture, called I-Beam LED or IBL, that Lithonia announced early this year (Figs. 2 and 3).

The goal was providing a minimum of 20 fc of lighting at the task level in the manufacturing area, and 15-20 fc in the warehouse when the lights were on. The MH lights had delivered upwards of 50 fc directly under each fixture, but the levels dropped below the 15-fc level in the middle ground between two lights. The IBL fixtures would be spaced further apart but the team tested a fixture and found the uniform light distribution could support the greater spacing.

Ultimately Mountville installed 25 IBL luminaires in the manufacturing area and 54 in the warehouse – a 40% reduction in fixture count. Figs. 4 and 5 show the warehouse area before and after the retrofit. Bud Paulk, president of Mountville Rubber, says he believes that the LEDs provide 10-15% better light in terms of uniformity and average brightness (Fig 6). In the manufacturing area the light level is now above 25 fc in most areas.

The baseline savings attributable to the LED lights is substantial. Paulk said the company measured the power consumption of the existing MH lights at 458W with the ballast. Moreover, he said they measured the LED fixtures at 286W. Paulk said the numbers are slightly higher than expected for both types of lights because the input voltage is higher than typical due to some specific equipment requirements in the factory.

The company doesn’t have an exact measure of the aggregate savings attributable to the lights, because the lighting is on the same power meter with office lighting, the office heating ventilation, and air conditioning (HVAC) system, and office equipment. But comparing the month of August from 2011 with the month of August from 2012, Paulk said electricity usage was down 39%. Clearly the specific percentage of savings strictly relative to plant lighting is greater.

The near-term net for Mountville Mills is a savings of $1995 per month. Paulk and his electrical crew are still experimenting with occupancy sensors and light control. The company purchased the IBL fixtures with an occupancy sensor on each fixture. Initially, the electricians set the lights to remain lit for lengthy times such as 15-30 minutes once a sensor was triggered. Having gained comfort with the instant-on LEDs, Paulk’s crew is transitioning to on-time periods as short as 30 seconds.

Paulk commented that he walked into the warehouse one weekday morning and was shocked that most of the lights were out on a workday, and for a moment slipped into the old mindset that no one was busy working. Hart said that despite his initial doubts, that 20% of the lights in the plant are off on average during the main shift and even more are off during night shifts. They clearly expect to see more incremental reductions in energy usage attributable to occupancy-based controls.

Before embarking on the project, Mountville analyzed the cost of the project and the expected payback. The company used its own in-house electricians to install the lights, although they did account for that cost in their analysis including the need to rent a hydraulic lift for a month. They based the projection on an electrical cost of $0.10/kWh. The expectation was that the project would payback in 2.2 years.

The cost analysis was based on fixture costs at a little under $800 including the occupancy sensor on each that is a $100 option. But electricity usage is lower than Mountville expected, and their initial analysis didn’t take tax credits into account. Ultimately the company could realize payback nearer to a one year time frame.

As for the lighting, Paulk says that the company has received only positive comments from its workers that enjoy the brighter and more uniform lighting. Visiting the factory, it’s easy to spot the one problem that plagues many SSL installations – glare. You can see that in some of the pictures presented here. The IBL fixtures are very bright. But in the Mountville application, the lights are mounted so high that realistically glare isn’t an issue unless you look for it.

The Lithonia team, recommended that Mountville install the IBL luminaires without any secondary lens to maximize light output. Lithonia does offer options for diffusing lenses that can reduce glare.

The installation in the rubber plant was just completed in early July. But the success with that project has prompted Mountville to immediately begin a second retrofit. In this instance, the company is upgrading their flagship corporate headquarters plant that measures 225,000 ft2.

The decision was made easier in part by the continual drop in SSL fixture pricing. Indeed Mountville is buying the same IBL fixtures but the price has dropped 6-7% in just months. Clearly that rate of change won’t continue, but it’s indicative of how rapidly LED lighting is maturing.

Meanwhile the retrofit in the second Mountville plant where they manufacture carpet, bind the rubber backing to the carpet, and cut the mats to size continues. In this case the company will replace 418 MH fixtures with 206 IBL luminaires.