AC-LED assemblies often can produce light output levels and efficacies of DC-LED assemblies, while eliminating the AC-to-DC converter. But can they move beyond niche applications, asks Laura Peters? 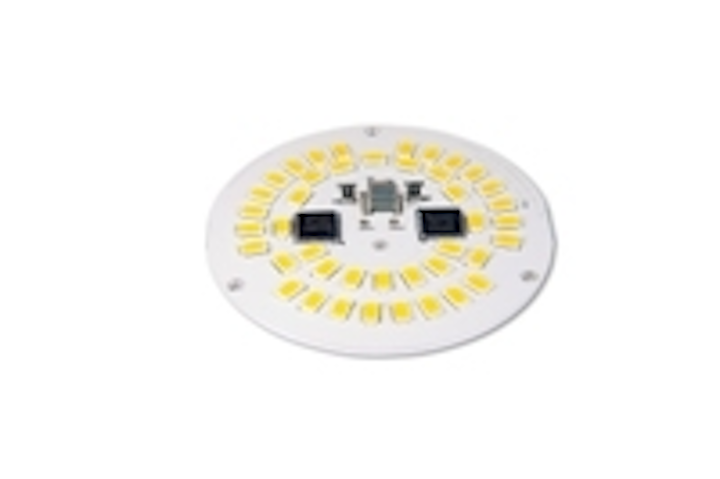 The concept of an AC LED is an elegant one. Because you can eliminate the AC-to-DC converter and several other electronic components that DC LEDs require, the electronics are simplified between the AC power source and the LED. Indeed, the AC-LED approach, which allows operation directly from line voltage or low-voltage AC transformers, can be as simple as an LED package and a ballast resistor for some applications. In others, the AC LEDs may require optimization of power management (power factor correction and total harmonic distortion (THD)). To date, AC LED’s application has been limited to niche applications such as cove lighting, garden lighting and decorative lighting, but the manufacturers of AC-LED assemblies claim that the entire LED retrofit-lamp market could one day be served by AC-LED schemes.

This article explores the commercial availability of AC-LED packages, assemblies and light engines and explains the reasoning behind an AC-LED approach that is designed to integrate more seamlessly with an AC electrical grid system than DC LEDs. It also delves into AC LED’s potential in the replacement lamp market, including MR16 lamps, A-lamps and downlights.

What does AC LED mean?

It’s important to note that AC LED is really a misnomer: LEDs are diodes with current flowing in one direction (as in direct current). However, with a so-called AC-LED scheme, LEDs can be connected directly to the mains power supply (typically 110V/60 Hz or 230V/50 Hz) and create light without the use of a typical driver. For each half-cycle of the AC’s sinusoidal waveform, half of the LEDs emit light and half are dark; this is reversed during the next half-cycle. In this configuration, sometimes referred to as “true AC” or an antiparallel approach, a large number of LEDs in series can operate directly from line voltage.

However, this approach has produced LED “strings” with limited efficacy. Therefore, several years ago AC-LED suppliers including Lynk Labs of Elgin, IL, Seoul Semiconductor of Seoul, Korea, and Epistar of Hsinchu, Taiwan, began producing LEDs that operate directly from low to high AC voltages with simple control circuitry. This includes low-voltage direct AC to high-voltage rectified LEDs. The LEDs typically accept between 12V on the low side on up to 240V today. One common design approach uses a series of LEDs to reach the 55V peak for the rising edge or trailing edge for the 110V line voltage, for instance. “This is really an AC implementation using a high-voltage architecture,” explained Brian Wilcox, vice president of Seoul Semiconductor, North America, a maker of AC and DC LEDs, assemblies and packages.

In comparison, DC LEDs require a driver to condition the AC power infrastructure to provide a DC low-voltage regulated power source for the LED light engine. This driver includes an AC-to-DC converter, typically a large electrolytic capacitor as well as other electronic components that can number up to 20 on the driver board for a 7W MR16 lamp. Even more components are used in high-power applications. However, Wilcox stated that despite the simpler electronics scheme, the challenge with AC LED is “you have to eliminate obstacles like total harmonic distortion, improve power-factor correction and provide zonal dimming. None of these three steps is trivial, especially when you’re trying to do them all at once.”

In fact, one could argue it was these limitations, and the lower efficacy relative to DC approaches, that have limited AC-LED adoption in the past. However, recent AC-LED and high-voltage products have largely addressed these concerns. Likewise, new designs have had to address flicker. “Many people say AC LEDs flicker. But flicker is really a function of the spatial separation of AC LEDs, which arises when the LEDs are spaced too far apart and the eye can pick up the rectified component at 50 or 60 Hz.” said Mike Miskin, CEO of Lynk Labs, an AC-LED package, assembly and driver maker. Some of the company’s latest designs use a high-frequency design scheme, stepping down the voltage using an electronic transformer or other method and creating a high-frequency signal (1000 Hz or higher) so that flicker is not a problem.

The fruits of the labor are the latest AC-LED light engines with better compatibility with the existing infrastructure, increased luminaire reliability due to fewer components and potentially faster time to market.

According to Miskin, there are essentially three flavors of AC LEDs on the market: low-voltage AC, high-voltage direct AC and high-voltage rectified AC. Low-voltage AC operates from 12V or 24V AC lines that have a magnetic or electronic transformer. Low-voltage AC is typically self-rectified from AC to DC. This is found in outdoor garden lighting, cove lighting and in linear retail lighting. High-voltage AC (15-55V) uses a bridge-rectified topology where the LEDs are driven in a pulsed DC mode every half cycle. With high-voltage rectified AC, some form of current-control circuitry is incorporated to keep the current from running too high during peaks in the voltage curve and doing damage to the LEDs.

AC-LED technology can be described as scalable because multiple AC LEDs can be run in series to match the line voltage level. Lighting applications requiring 12V to 277V AC can be accommodated in this way. In fact, AC LEDs can even be driven at resonance for maximum efficiency, which is not possible with DC. Miskin explained that Lynk has devised a new method for driving AC LEDs near resonance so that even if one lamp were removed or failed, the remaining lamps would still operate effectively. “In the future, we believe that high frequency can be used to match the RLC component of the actual AC-LED chip or package and that can potentially allow for efficiencies up to 98% in AC-LED systems,” he said.

The key target market for low-voltage and high-voltage AC designs today is really the replacement lamp market, including small-footprint lamps such as G4, G8, GU10 and MR16 lamps as well as B10 replacement lamps for chandeliers. The companies are also designing products for A-lamps, BR lamps and linear module replacements for fluorescent tubes.

Downlights are a key target market for AC schemes because often downlight fixtures afford little extra space for additional electronics. In addition, any space that is available typically needs to be dedicated to the heat sink. For example, the Seoul Semiconductor Acrich2 16W downlight assembly (Fig. 1) features a lumen output of 1250 lm at 3000K CCT and 120° viewing angle.

Fig. 2 compares a DC-LED approach with its electronics to two AC-LED approaches. With a diameter of only 2 inches and length of less than 2 inches, the MR16 lamp or GU10, the latter of which connects directly to line voltage, are prime candidates for the AC module.

Ultimately, cost and reliability will drive the selection of AC-LED schemes over the more established DC-LED alternative. “We have already reduced the package cost substantially, which accounts for 40% of LED cost, by going to chip-on-board or surface-mount device implementations,” said Wilcox. He argues, however, that the goal of reaching the $10 per 60W-equivalent bulb, often cited as an adoption point for consumers, can only be met by eliminating the high component cost in LED lamps and luminaires. “The best way to achieve the step-function decrease in cost is with driverless AC implementations.” He added that the first products to hit commercial retail big-box stores will be replacement lamps that do not require dimming, some of which will be larger form factors like A19 and BR30.

“I feel confident we will see bulbs in the first half of 2012 at $15 for a 60W replacement and $10 by the end of the year, from reputable companies, with some of those being driverless. This will include retrofit bulbs and downlight replacements – these are really good fits,” said Wilcox.

Ambient or accent lighting (Fig. 3) is another core application for AC LED. Shown are the LED module and resistor.

As indicated previously, for such products to prevail in the marketplace, they must feature equal or better light output, efficacy, power factor correction and THD to DC LED light engines. Though light output and efficacy must be compared one-to-one for a given application, we will look at the issue of power management for AC LEDs.

As discussed, poor power management in the form of power factor correction and THD limited the early adoption of AC LEDs. The power factor refers to the ratio of the real power used by the lamp or luminaire versus the apparent power. In AC-LED approaches, the load is non-linear so power factor is potentially a bigger concern.

THD is a numeric representation of distortion in the current waveform relative to the sinusoidal voltage waveform on the AC mains. Harmonics are unwanted currents at multiples of the fundamental line frequency (e.g., 50 or 60 Hz), which create power losses. Though it is beyond the scope of this article, different types of conditioning circuits (including resistors and switch-mode power supplies) are used to limit THD in AC light engines.

Wilcox noted that in Seoul Semiconductor’s Acrich2 product line, power management has been optimized for 90% power efficiency and <25% THD.

One of the core advantages of AC-LED approaches is the compatibility with phase-cut (triac) dimmers. “We can dim down to 2%, which is a real advantage,” said Miskin. In addition, Lynk Labs has introduced technology that warms the color of the light upon dimming from 4000K to 2000K using AC LEDs and current-limiting components.

AC-LED light engines provide a compelling platform especially for retrofit lamps. Whether they become the choice for lamp and luminaire manufacturers will depend on the combined performance and cost of these solutions compared to the better-established DC-LED assemblies and light engines. The race to produce a $10 LED 60W-incandescent-equivalent lamp could be won by either or both technologies.