Current Electric installed efficient SSL fixtures along with occupancy sensors, and in cases daylight sensors, in a retrofit of the parking facility that serves The Shops of Grand Avenue. 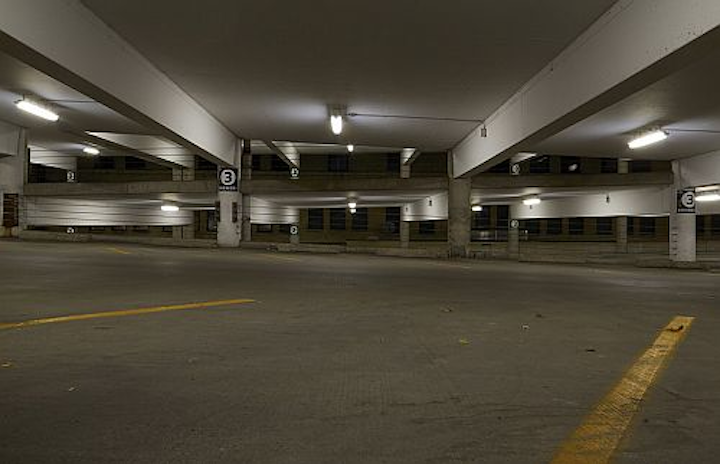 Precision-Paragon (P2) has announced an LED lighting retrofit project at the parking garage that serves The Shops of Grand Avenue in Milwaukee, Wisconsin and the facility expects to save $134,000 in energy costs annually. Current Electric of nearby Brookfield handled the solid-state lighting (SSL) project that also includes adaptive controls while improving the lighting in the garage.

The Shops of Grand Avenue are located in the historic Plankinton Building, which dates to 1915. The shops opened in 1982 in the Plankinton Arcade, which had previously been an entertainment venue. The shops have become a popular destination for tourists and residents and now the parking facility has been brought up to the latest standards in terms of lighting and safety.

Current equipped each of the new fixtures with occupancy sensors that can detect both pedestrian and vehicular traffic. When an area is vacant, each fixture can reduce its light output by 40% autonomously.

The system also uses daylight sensors that are mounted on the 450 fixtures in areas of the garage that can receive natural light during the day. Those fixtures can extinguish autonomously as light levels allow. Moreover, the fixtures implement a short delay before turning back on when light levels drop to account for instances such as a cloud temporarily blocking some sunlight.

Still, it was also concern over light quality that drove the election of the P2 products. As the nearby before and after photos show, the LED lighting delivers better uniformity whereas the MH lights created very bright spots under the fixtures. P2 said that the fixture design delivers diffuse light and minimizes glare for drivers.

The project will also deliver significant reduction in maintenance cycles for the lighting, a fact that will be measured in savings and in reducing the perils of maintenance in the garage environment. "Lighting maintenance in parking garages can be difficult, and hazardous," said Randy Breske, director of lighting business development at Current Electric. "The new lighting system we installed more than doubles the maintenance interval in the parking garage."

The VPL product line ranges in efficacy from 97-103 lm/W depending on the lumen package and CCT. In the Milwaukee case, the facility expects to save 1,344,963 kWh annually and equates that to 949 metric tons of carbon emissions.

Parking-area lighting is one of the specific applications that the US Department of Energy (DOE) has identified as having major potential for energy reduction. We have covered a number of LED-based projects in garages including the Gateway Center Parking Garage in Palatine, Illinois.