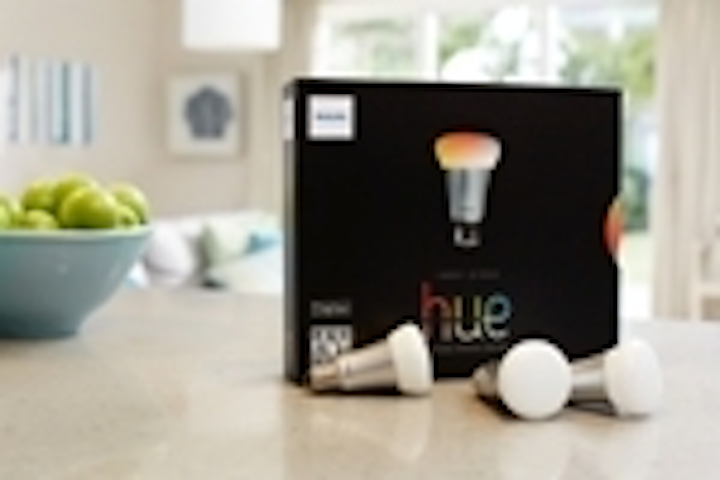 Philips Lighting has introduced a new solid-state lighting (SSL) retrofit lamp called Hue that uses a mix of LEDs to produce tunable white light and 16 million colors. Users of Hue will control the lamp using Apple or Android smartphones or tablets that connect to the lamp over a ZigBee-based wireless network that is bridged to home or office data networks and the Internet.

For now, the Hue lamp is only being sold in Apple stores in the US. A $199 Hue starter kit includes the required ZigBee bridge and three of the Hue lamps. Additional lamps sell for $59. One smartphone can control as many as 50 lamps. And the Apple and Android apps for the lamps are free.

Uses for Hue are both novel and practical. A user can turn lights on remotely, perhaps just before arriving home on a dark night. In terms of white color temperature and RGB color control, the Hue app comes with preset lighting scenarios for read, concentrate, energize and relax modes. Buyers can program additional presets. Certainly as researchers discover the positive impact of the light spectrum on our health, Philips can argue that Hue can enhance people's wellbeing while also offering conveniences.

In terms of other uses, the product can also serve as a remote indicator of activity. For instance, you can remotely detect if a light is turned on. In the case of an elderly family member living alone, seeing a light tuned on is an indicator that the person awoke and took action. Finding many lamps on late at night might tip parents to an unauthorized party held by their kids.

There are a number of ways to create custom color settings, but one is tied to photographic memories. You can use a photo stored on a smartphone or tablet and have the app replicate a color in the photo. You could replicate the color of a treasured sunset, or create a light scenario in which photos are lit by lighting that makes the photo look optimal.

Combined with a smartphone, Hue can act as an alarm clock when used in a bedside table lamp. Down the road Philips says that you will be able to synchronize the light output of Hue to video presentations -- enhancing movies, for instance, by changing the lamp color to red when an explosion occurs in an action movie..

That forward-looking claim implies accurately that the Hue product is upgradeable. Some capabilities of the product are realized in the smartphone app, which is clearly upgradeable. Evidently, the lamp itself also integrates a microcontroller and memory that can be upgraded over the ZigBee link.

Philips hasn't revealed the full design details behind Hue, but has said that it uses a mix of three colored LEDS – lime-green, red-orange, and royal-blue LEDs. Philips said that the lime-green LED is crucial to the lamps' ability to deliver a CRI of 91. Traditionally, green LEDs are less efficient than other colors, but Philips Lumileds developed the lime-green LED that apparently overcomes the efficiency obstacle to some degree.

Hue can produce 600 lm, making it generally equivalent to a 50W incandescent lamp. The LED-based Hue uses only 8.5W.

Philips said that the lamp design is based on the ZigBee Light Link standard that was conceived to allow plug-and-play interaction between lamps, dimmers, outlets, sensors, switches, and other lighting-related products from multiple vendors. Philips didn’t say the lamp has passed formal certification at this point. But reliance on ZigBee Light Link should ultimately mean that Hue will interoperate with products from other vendors.

Philips will encourage third parties to develop additional apps for Hue and associated products. The company is publishing the application programming interface (API) that software developers use to communicate with the lamps. Moreover, it is releasing a comprehensive software development kit (SDK).

Many of the capabilities of Hue require that the lamp be left powered at a low level at all times, much like a TV is always operating at a low power level awaiting a command from a remote control. Philips says that the so-called vampire power is very low due to the usage of ZigBee rather than say Wi-Fi. Philips said that Hue uses 300 mW with the lamp off, but the ZigBee interconnect active.